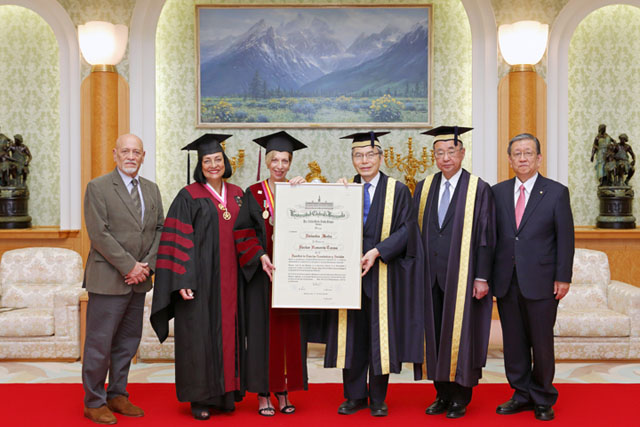 The Central University of Venezuela, with 11 departments and over 40,000 students, was established in 1721, making it the oldest and most notable academic institution in the country. Since 1995, the university has hosted a number of events organized by SGI-Venezuela, including an environmental exhibition, youth workshops and lectures on the theme of peace. The University City of Caracas, home to the main campus of the university, was designed by the Venezuelan architect Carlos Raúl Villanueva and declared a World Heritage Site by UNESCO in 2000.

In her opening remarks, Professor Texier shared her appreciation for Mr. Ikeda’s contributions and stressed the importance of working to construct a culture of peace and expand capacities for dialogue, especially within Venezuelan society where violence is on the rise. She also thanked SGI-Venezuela for its numerous youth-led activities and for initiating the “Young Builders of Peace” workshop, which has served as a permanent community service project for the Central University of Venezuela since 2010. Some 2,500 faculty and students have been involved in the program, which has been held at various venues of partner organizations with over 20,000 participants.

Dean Struck shared that she was deeply moved by Mr. Ikeda’s words that an inner-directed revolution in just a single individual could help achieve a change in the destiny of a nation and how essential this ideology is for Venezuelan society. She stated that the honorary doctorate conferred upon Mr. Ikeda recognized his dedication to fostering a culture of value-creation, promoting dialogues for peace, inspiring individual development and working for the betterment of the world. The capacity to cultivate an ethics of peace and social contribution, as well as a global mindset, she said, exists within the creative potential of each individual. As defined by Soka Gakkai, a culture of peace that respects differences and links hearts is not an abstract idea; however, it is up to each person to assume the task of planting and cultivating such a “garden” of peace.

In his acceptance speech, Mr. Ikeda conveyed his heartfelt gratitude for the honor. He also shared what he considers to be the “three bridges of hope” provided by education: “A bridge of courage” to surmount adversity; “a bridge of wisdom” that ennobles and unites people; and a “bridge of value creation” that leads to a peaceful future. Referring to the university crest that has emblazoned on it an olive branch and palm leaf symbolizing “peace” and “victory,” respectively, he shared his resolve to continue dedicating himself to paving the way to “peace” and “victory” throughout his life alongside the members of the faculty whom he holds in high respect.

[Adapted from articles in the June 12, 2019, issue of the Seikyo Shimbun, Soka Gakkai, Japan]