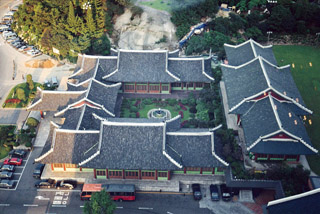 The building looked alive. It seemed to be conversing softly, voicelessly, with the clear blue sky.

It was my second trip to South Korea, in May 1998, after a period of eight years. White ridges topped the graceful blue-tiled roof--a portrait of gently arching lines. Here in South Korea, amid a beautiful natural setting, I felt I had encountered an indescribable gentleness.

This building, visible from my hotel room window, is called the "Guest House." Exactly as its name implies, it was once used to greet and entertain special guests of the state. Construction began in 1959, and after two interruptions the entire project, including the stately courtyard and garden, was finally completed in 1967.

My first visit to South Korea had been in the fall of 1990. At that time, I was scheduled to attend the opening of an exhibition of Western art in South Korea. We had sponsored this exhibition hoping to express our gratitude, even in some small way, to this country to which we Japanese owe a profound cultural debt. However, a typhoon delayed my flight, and so my stay was shortened to a mere 26 hours, making my first visit to South Korea an extremely rushed affair. Before having to return to Japan, all I could do was briefly pay my respects to the city of Seoul which, for 500 years, was the capital of the Joseon Dynasty. I vowed that I would visit again.

So in 1998, at the invitation of the esteemed Kyung Hee University in Seoul, I realized that wish. On that occasion, I enjoyed a tour of the university's two campuses--one in the city and the other in the suburbs of Seoul. I also paid a visit to the SGI-Korea Headquarters, where I met the Korean members, who had all endured indescribable hardships. I was moved beyond measure. A fragrant May breeze graced the city of Seoul on that day.

The Korean people are gentle of heart. A scene that eloquently depicts this kindness, and which was often observed in the countryside, is that of a farmer leading an ox that is pulling a cartload of rice straw. The farmer shares in the animal's labors, also shouldering a full load of straw on his own back.

Among South Korea's myths of national origin, none are warlike. There are very few tales of invasion of foreign lands or of cruel destruction. Even to the Western ships that had encroached on Korean waters with the aim of opening the country to foreign trade, the Korean people provided food, with the sentiment, "How hungry you must be, having sailed the oceans for thousands of miles, braving wind and waves!"

Such is the magnanimous spirit of the Korean people. The heart of the Korean nation is rich and profound. These are a people who, despite having endured and transcended 5,000 years of hardship, have never lost their kindness. They have allowed their sorrow to pile up like drifts of snow in the depths of their hearts, rather than direct their hatred at others. Smiling, they have maintained their belief in tomorrow.

This is a country of love, a country of beauty, and a country of culture. Nevertheless, Japan's brutal nationalists managed to inspire anger deep in the hearts of these peace-loving people, an anger that will not be forgotten for many generations. Wherever they went, the Japanese plundered and pillaged, brutalized and massacred. The Korean people knew them as uncivilized demons, as lower than animals. Culture--this is the power to recognize and appreciate what is invisible to the eye, to sense the unseen heart of things. How lacking modern Japan is in this regard!

A mouth-shaped garden is said to invite good fortune in the form of abundant food for the household. A sun- or moon-shaped garden is said to provide a household with heaven's energy. In this way, the entire structure communes with the heavens. This is why great pains were taken to align the roof tiles in an exquisite, delicate pattern, even in places that are hidden from view. Culture is also the spirit never to dismiss such honest simplicity.

On the last night of my visit, we were given the use of a room in the Guest House to hold a banquet for representatives of Kyung Hee University and others I wished to thank for their assistance with my visit. On that occasion, I praised Oh Chung Myung, wife of Choue Young Seek, the university's founder. During the early days of the university, with her baby strapped to her back, she would prepare and serve home-cooked meals for students suffering from financial difficulty, and offer them encouragement.

In those days, there were times when the university had a hard time paying teachers' salaries. One day before payday, Mrs. Oh took her diamond engagement ring to a pawnshop to exchange for much-needed cash. The pawnbroker turned her away, though, claiming that he could not be sure the diamond was real. She walked home alone in the dark in tears. In spite of such hardships, she has lived for the purpose of realizing Dr. Choue's determination for the creation of a "world of culture." That is the strength and kindness of this amazing "mother" of Kyung Hee University.

That, I thought, is the heart of the Eastern "country of kindness," a spirit that also imbues the Guest House. Standing next to her husband, dressed in traditional chogori short-coat and ch'ima skirt, Mrs. Oh looked delightfully charming and unaffected as she listened somewhat bashfully to my tribute to her efforts.

That night, the silver light of a half-moon bathed the blue-tiled roofs of the Guest House. At that moment, I was overcome with anger at the arrogance of the Japanese who had trampled upon this beautiful country.