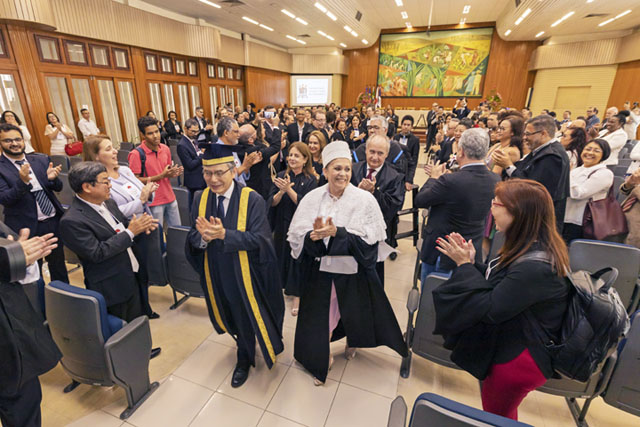 Federal Rural University of Pernambuco Rector Sena (foreground, in white cap and cape) and Soka University President Baba (to her left, in cap and gown) walking down the aisle

On August 24, 2019, the Federal Rural University of Pernambuco (UFRPE) in Recife, Brazil, conferred an honorary doctorate upon Soka University founder Daisaku Ikeda for his longstanding contributions to peace, culture and education, as well as for his advocacy of the UN’s Sustainable Development Goals (SDGs). UFRPE Rector Maria José de Sena entrusted the award to Soka University President Yoshihisa Baba, who received it on Mr. Ikeda’s behalf.

UFRPE was founded in 1947 and enrolls approximately 15,000 students. The school is known for its cutting-edge research in the fields of science and technology. It is also known for addressing disparities in the community through programs that promote health and education among children and the elderly as well as through support to students from low-income families.

Prior to the conferral ceremony, an international forum on Soka education was held at the UFRPE campus with representatives from 18 universities throughout Brazil together with Soka University representatives. The universities affirmed their commitment to working together toward advancing the SDGs.

At the conferral ceremony, Rector Sena referred to the concept of “human revolution,” a process of inner transformation, and referenced Mr. Ikeda’s quote: “A great human revolution in just a single individual will help achieve a change in the destiny of a nation and, further, will enable a change in the destiny of all humankind.” She stated that both education and human revolution have as a common goal the development of the individual—raising them to respect others, to take pride in hard work, to have a strong sense of responsibility and cherish truth and justice. She shared her belief in the importance of the philosophy of Soka education in creating value in society, which includes mutual respect, mutual understanding, hope, peace and genuine humanism—values that should become the norm in the coming age. She concluded by expressing her desire to contribute to creating a culture of peace alongside Mr. Ikeda.

In a message, Mr. Ikeda fondly recalled his meeting with Austregésilo de Athayde (1898–1993), former president of the Brazilian Academy of Letters and a staunch advocate of human rights, who was a native of Pernambuco State. Commenting that Pernambuco has fostered numerous capable individuals, Mr. Ikeda commended UFRPE for sponsoring the international forum that contributes to the betterment of humanity. With URFPE taking the lead and other northeastern universities in Brazil and Soka University following suit, he cited three ways for them to serve as “beacons” of value creation—by embracing the spirit of contribution and service with love and passion, developing the wisdom for surmounting all adversity, and fostering harmony and solidarity for the mutual flourishing of all. He concluded by thanking the professors in attendance for their efforts and called upon them to be such beacons that illuminate and brighten the future of humanity.

[Adapted from articles in the August 29, 2019, issue of the Seikyo Shimbun, Soka Gakkai, Japan]