Global Citizens and the Imperative of Peace

"Global society today faces myriad interlocking crises. These include the issues of war, environmental degradation, the North-South development gap and divisions among people based on differences of ethnicity, religion or language. The list is long and familiar, and the road to solutions may seem all too distant and daunting. It is my view, however, that the root of all these problems is our collective failure to make the human being--human happiness--the consistent focus and goal in all fields of endeavor."1--Daisaku Ikeda [Read full text] 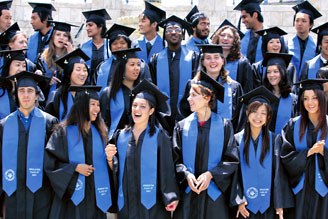 Graduation ceremony for Soka University of America's Class of 2007 (Aliso Viejo, California, May 2007)

A specific focus of Ikeda's educational endeavors has been in fostering the ethic of global citizenship. Education for global citizenship is education that fosters a sense of belonging to and responsibility toward a global human community. It is "a genuine concern for the peace and prosperity of the world" grounded in robust awareness of our shared humanity. It is, after all, the failure of such empathy that makes war possible.

The global citizenship ideal is present in all of the educational institutions that Ikeda has founded, but it has perhaps been most clearly realized in the establishment of Soka University of America, with its emphasis on the global diversity of its student body and its compulsory second language acquisition and study abroad programs, as well as in its core curriculum.

The emphasis given to international student exchange at Soka University, Japan, reflects this same ethic of globalism. In 1975 Soka University was the first Japanese institution of higher education to welcome exchange students from China following the resumption of official diplomatic relations between the two countries in 1974. Today the university's exchange program with over 180 universities and over 50 countries is the most diverse in Japan.

The ideal of global citizenship is one which also inspired Makiguchi's vision of education. Throughout his career, Makiguchi remained committed to the idea that education should encourage a sense of being, simultaneously, citizens of a local community, a national society and the world. This philosophy stood in stark contrast to the ultranationalist indoctrination that increasingly shaped Japanese education in the 1930s and 40s.

Ikeda's conviction in the necessity of such global consciousness was shaped by his own bitter experience of war and the radical dehumanization of other peoples on which war is always based.

In a speech at Teachers College, Columbia University, Ikeda outlined the following three characteristics of a global citizen:

Echoing these ideas, Lawrence E. Carter Sr., Dean of the Martin Luther King Jr. International Chapel at Morehouse College, writes, "Democracy flourishes only when the populace is enlightened, can dialogue and cooperate in spite of its difference, and builds a society of hope pointing toward the ultimate goal of peaceful coexistence. Ikeda's philosophy of education can be an indispensable tool for educators on all levels to begin molding our spirits and public policies to fit into that crown."2

Describing his vision for Soka University of America, Ikeda expresses his hope that "all who learn here will be able to develop and polish the inner strength needed to generate limitless value from all forms of knowledge, to forge, in your capacity as world citizens, the peace and happiness of humankind."3

3 Ikeda, Daisaku. 2006. "The University of the Twenty-first Century--Cradle of World Citizens." In To the Youthful Pioneers of Soka: Lectures, Essays and Poems on Value-Creating Education, p. 173. Japan: Soka University Student Union.