Infusing Culture into the Soka Gakkai

"As a person who lived through World War II, from the time I first met my mentor Josei Toda when I was 19 years old, I have firmly believed that Japan must become a nation of culture. Only culture, I was certain, could foster our recovery from the tragedy of war."1--Daisaku Ikeda 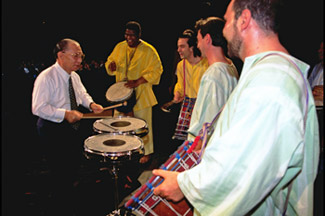 Ikeda interacting with participants at a youth culture festival held in Milan, Italy, 1994

One of Ikeda's innovations as a youth leader in the Soka Gakkai was the introduction of cultural elements into the organization. In 1954, in his mid-20s, he established the Soka Gakkai Music Corps, which was initially composed of a handful of members who performed to brighten up meetings.

Some amongst the older generation of leaders were unsupportive of these innovations seeing them as out of place or unnecessary to a religious movement. But Ikeda was determined. "My sole aim in undertaking all these initiatives," he writes," was to impart fresh hope to others, to infuse my friends with boundless strength."2 This statement again makes clear his strong belief in the powerful and necessary role of the artistic and cultural dimension of life.

Today there are some 20,000 Soka Gakkai music corps members throughout Japan, comprising choral, marching band and symphonic groups. Many of these groups have become highly polished and successful units. The Soka Renaissance Vanguard drum and bugle corps, for example, has been selected as Japan's top marching band over 10 times since 2002. These groups also engage in cultural exchange programs with other countries including China.

Ikeda also established an Arts Division within the Soka Gakkai. This was a means for those members of the organization involved in various art forms to develop an individual and collective vision as Buddhists of their mission and social contribution through the arts. In 1963, the first Soka Gakkai arts festival was held, showcasing the talents of the division's members. As the division's membership grew from an initial 20 at its founding in 1962 to some 10,000 five years later, festivals were held in public venues throughout the country and became a tradition of the Soka Gakkai. 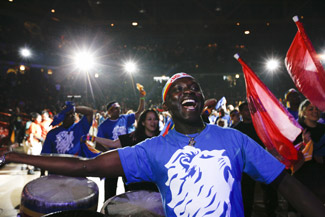 Describing the significance of these festivals, Ikeda writes that they were not intended to serve as a forum for promoting ideology but simply to give expression to the principle that art is "the blossoming of the life of the human being and the triumph of the spirit." There is a natural joy, he says, that comes when individuals strive to overcome their sufferings and to realize peace and happiness for their friends. "When this joy is crystallized in the form of song, dance, drama, or any other type of performance, there is no doubt that a truly magnificent art will be born."3

When Ikeda established the Soka Gakkai International in 1975, formalizing the expanding international network of Nichiren Buddhist practitioners, he made advancing peace, culture and education the heart of the organization's aims, a description of its essential social motivation. Culture is thus quite literally central to the organization's mandate.

While Ikeda draws a distinction between his efforts to promote culture and the promotion of Buddhism specifically, he does see a direct connection between culture and the arts and religion. He quotes the poet T. S. Eliot's opinion that it is a widely held error "that culture can be preserved, extended, and developed in the absence of religion." Ikeda writes: "The rich earth of a great religious spirituality gives rise to the blossoming of magnificent flowers of culture and art."4

He asks, "How aware are we of our own inner life, our spirituality--something so intangible yet so priceless? How much effort do we make to perceive that which is not obvious, which can neither be seen nor heard? I believe the exploration and enrichment of the human spirit is what determines our very humanity. Such enrichment provides an inner compass that can lead civilizations to greatness."5

The broad definition of culture here, especially with regard to its ability to guide civilizations, encompasses academia. In a number of SGI organizations around the world, Ikeda has overseen the establishment of culture departments with the aim, similar to the arts groups, of encouraging people in the academic sphere to cultivate a vision of social contribution based on Buddhist ideals. Ikeda's addresses at universities around the world could be said to be based on the same objective.