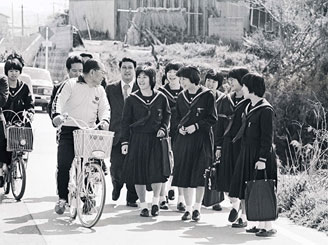 Ikeda finds opportunities to interact with the Soka School students.

"The starting point and essence of Soka (value-creating) education is the spirit to treasure each student's individuality so that they can become happy and enjoy a glorious future. Education does not exist for the sake of the nation, for business, or for religion. The aim of Soka education is the happiness of oneself and others, as well as society as a whole, and peace for all humanity."1--Daisaku Ikeda 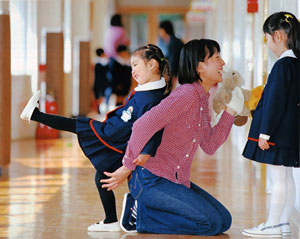 The quality of the relationship between teacher and student is basis of Soka education.

The key element in Soka education is the quality of the relationship between teacher and student--the teacher's sense of care for the student, their efforts to appreciate and develop the unique character and potential of each learner.

Ikeda has characterized this stance as ningen kyoiku, a phrase which can be translated as humanistic, humane or people-centered education. As he says, "People are shaped by people. There is no genuine education without earnest life-to-life interaction and inspiration."2 The teacher's depth of character is crucial in this equation. "The level of culture that teachers have attained in the depths of their lives through their own personal effort is conveyed from one human being to another, from teacher to student."3

In a similar vein, Ikeda stresses the importance of trust between teacher and student, noting the breakdown of this trust as a significant factor in the violence evident in contemporary Japanese schools. Trust cannot be exacted from another person; it must be demonstrated first by oneself toward the other. Addressing Soka educators, he insists, "Whether or not you can establish relationships of trust in the classroom will depend on whether you yourselves can believe in your students. To believe is a virtue, and such virtue is the strongest link between one person and another. A large-hearted person who loves and believes in the students will, without fail, warmly embrace any child."4 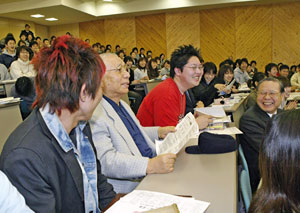 Ikeda's efforts to personally interact with students of the Soka schools are an example of the spirit of this approach. As well as exchanging correspondence with students, Ikeda visits the schools as occasion allows, speaking with the students and taking time to listen to their problems. Ikeda also goes to great effort to create opportunities for Soka students to interact with the many high-profile guests that he receives from around the world. Many Soka school alumni cite such encounters as decisive moments in the development of their life-paths. Likewise, many students have poignant memories of being personally encouraged by Ikeda.

One example of Ikeda's efforts to interact with the students is a series of published discussions with student representatives. In discussions centered on themes such as friendship, art, human rights, literature, love, or choosing a career, Ikeda listens to the opinions and concerns of the participants and offers his perspective and advice. These discussions are geared variously toward high school and junior high school students. They offer a vivid example of Ikeda's deep concern to inspire and encourage young people and to help them broaden their horizons.

"Nothing is irredeemable in youth. Rather, the worst mistake you can make when you're young is to give up on yourself and not to challenge yourself for fear of failure. The past is the past and the future is the future. You should keep moving forward with a steady eye on the future, telling yourself, 'I'll start from today!' 'I'll start afresh from now, from this moment!'"5