In 1955, Toda made the decision to enter the Soka Gakkai into the political realm, fielding 53 capable Soka Gakkai members in Japan's local elections that year on independent tickets. He believed that the process of positive social reformation of Japanese society could ultimately not be separated from the political process. From Ikeda's account, Toda disliked the "Machiavellian machinations"1 of politics and made the decision with mixed feelings. 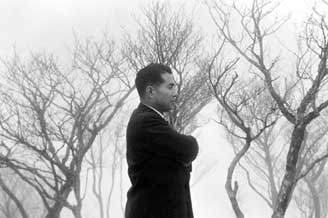 Political representation in Japan in 1955 was split between the conservative interests of big capital and leftist organized labor. Between these two poles was a large underrepresented segment of the population--non-labor-union members, small business owners and the like--who had been side-lined in Japanese politics, and about whom Toda was concerned.

The following year, 1956, the Soka Gakkai fielded six candidates in the House of Councillors (Upper House) national election. Ultimately, three candidates were elected, including a candidate running in the Osaka district in a campaign led by Ikeda. It was this election result that caught the public's attention.

The sudden emergence of a burgeoning grassroots network that could impact on national politics was greeted as a threatening development by the political establishment. The events following the election in the coal-mining town of Yubari, Hokkaido, demonstrate the vehemence of the social and political force brought against the Soka Gakkai and later Ikeda specifically, as he stood up to act upon Toda's social vision. 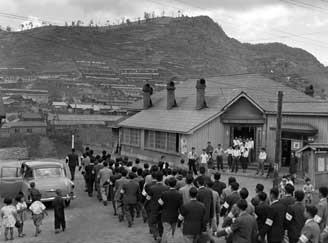 Yubari was dominated by the Coal Miners' Union, then one of the strongest political forces in the country. When the House of Councillors election results showed that the union-backed candidates had lost votes to the Soka Gakkai candidates, the union, feeling threatened, initiated a campaign of intimidation and media propaganda against Soka Gakkai members and their families in the town, most of whom worked in or were in some way affiliated with the coal mines. Soka Gakkai members working in the mines were harassed and threatened, houses of Soka Gakkai members marked and their prayer meetings disrupted. Door-to-door visits were organized to persuade members to renounce their faith, and many felt their livelihoods threatened.

Toda dispatched Ikeda to Yubari to resolve the situation. Under his leadership the local Gakkai members rallied and openly challenged the constitutionality of the union's actions, calling on them to justify their assault against the freedoms of speech and religion. Unable to publicly defend itself, the union backed down and ceased its harassment.

This, however, was merely the beginning of the Gakkai's struggles.

While battling the unjust actions of the Coal Miners' Union in Yubari, Ikeda was summoned by the Osaka Prefectural Police Headquarters for questioning. On July 3, 1957, he flew from Japan’s northern island of Hokkaido to Osaka. Changing planes in Tokyo, he had a brief reunion with his wife and Toda at the airport. That evening he was arrested and incarcerated on a charge that was later proven to be entirely groundless.

A number of Soka Gakkai members had been charged with violating the random vote solicitation clause of the Election Law and the prosecutors accused Ikeda of responsibility. He was jailed for two weeks and interrogated.

Armed with forced confessions from some of the arrested Soka Gakkai members, prosecutors pressed Ikeda to also sign a false confession, threatening that they would arrest Toda and raid the Soka Gakkai headquarters and Toda's businesses. 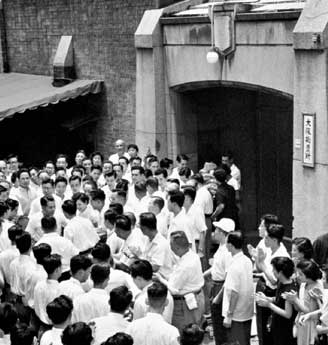 Soka Gakkai members greet Ikeda after his release from the Osaka detention house on July 17, 1957.

It was clear that the arrest of the Soka Gakkai members had offered a pretext for launching an attack on the Soka Gakkai. Despite the facade of democratization imposed by the Allied Powers, many of the power structures and personalized networks of influence that had operated with impunity in Japan in the militarist era remained unchanged. The nationalists within the Public Prosecutors Office had attempted to crush the Soka Gakkai in the 1940s and had imprisoned Toda and his mentor Makiguchi for their opposition to the militarist regime. For them, the Soka Gakkai remained a threat and its growing popularity was an alarming development that had to be dealt with.

The case went to court but dragged on for four and a half years. Ikeda, however, was finally exonerated of all charges in January 1962. The prosecution did not appeal. Amongst other things, it emerged during the case that the prosecution had falsified the interrogation transcripts of arrested Soka Gakkai members.

These were the first taste of the attacks by authority that would dog Ikeda in the decades to come.