As well as developing Ikeda's scholarship, Toda also began to place him in challenging leadership roles within the Soka Gakkai, testing and developing his leadership skills. In 1951, with his personal financial affairs in order, thanks largely to Ikeda's efforts, Toda was inaugurated as president of the Soka Gakkai. During the inauguration ceremony he declared his goal to build an organization of 750,000 households before his death, from what was then a mere 3,000 members. The announcement was accepted by the existing Soka Gakkai membership as rhetorical hyperbole. Ikeda, however, realized that Toda was absolutely serious. The years between 1951 and 1957, when the goal was accomplished, became a period of intense activity for the organization and, increasingly, Ikeda. 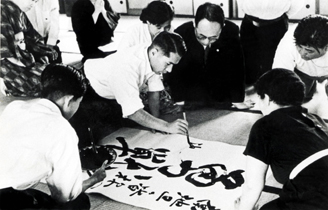 One of the first instances in which Ikeda was able to demonstrate his leadership abilities occurred in 1952. Frustrated by the slow pace of the organization's growth, Toda appointed Ikeda in a position of responsibility in Tokyo's Kamata Chapter. Within the single month of February the chapter added a completely unprecedented 201 new households to its membership. This example invigorated the entire organization, triggering the momentum for the realization of Toda's goal of 750,000 member households.

Ikeda's ability to organize and to inspire people was demonstrated on an even grander scale four years later during a now historic propagation campaign in Osaka in 1956. Under his leadership the organization in Osaka added 11,111 new households to its membership in the space of a single month.

In 1952, Ikeda married Kaneko Shiraki. Before they married, he would occasionally walk her home after a Soka Gakkai meeting. Although polite and engaging, Kaneko recalls how Ikeda would quickly fall into deep philosophical musings as the two strolled along the riverbank toward her house, articulating his thoughts on world affairs and social injustices, or the nature of life and the universe, and elaborating visions of future human society. "I listened, trying to take it all in, but it was all I could do to keep up with the grand scale of his thoughts,"1 Kaneko would later confide. She also recalls him as a person deeply sensitive to any sort of social injustice, who would talk often about the kind of ideal, humanistic organization he would like to build.

After their marriage Kaneko became Daisaku's closest confidante. Later, after he took on the crushing pressures of the organization's presidency, her support became vital.