(From One by One by Daisaku Ikeda, a collection of essays in which he reflects on his encounters with various world figures, scholars and activists who have inspired him.)

There are times when a single word changes history, when an ordinary day takes on an enduring—even eternal—significance. And there are struggles in which a solitary individual becomes a leader who transforms the world. When Rosa Parks refused to obey the order of the bus driver to give her seat to a white passenger and said the single word, “No,” the bell of change tolled for the history of African Americans. Many others were involved in the movement that grew out of years of frustration at injustice, but Rosa Parks became a catalyst and a pivot for change.

I first met Mrs. Parks on the Calabasas campus of Soka University of America (SUA) in California on January 30, 1993. I was immediately struck by her warm, motherly personality. This, I thought, must be the gentleness that charms everyone. She was turning 80 and had clearly endured a great deal in her life; yet she had a quiet smile on her lips at all times. She was humble, and yet you could see that she was a person of unbending conviction.

In a survey published in the United States in 1993, in which historians and scholars were asked to name the most influential American women of the 20th century, Rosa Parks ranked number three. The list was topped by first lady and social activist Eleanor Roosevelt.

Tired of Giving In

Mrs. Parks, a living legend, is widely known as the mother of the Civil Rights movement. Her story is told in school textbooks across the United States and in many other countries around the world. Truly almost no one is ignorant of who she is and what she has done. Yet her extraordinary story demands to be told again.

On December 1, 1955, in Montgomery, Alabama, the 42-year-old Rosa Parks was returning home after a hard day’s work in the tailoring section of a department store. After boarding the bus she noticed that the driver was the same unpleasant man who had forced her off a bus on a previous occasion some 12 years earlier. That time the back of the bus had been full, so she had gotten on at the front—and for that, the driver had put her off the bus. 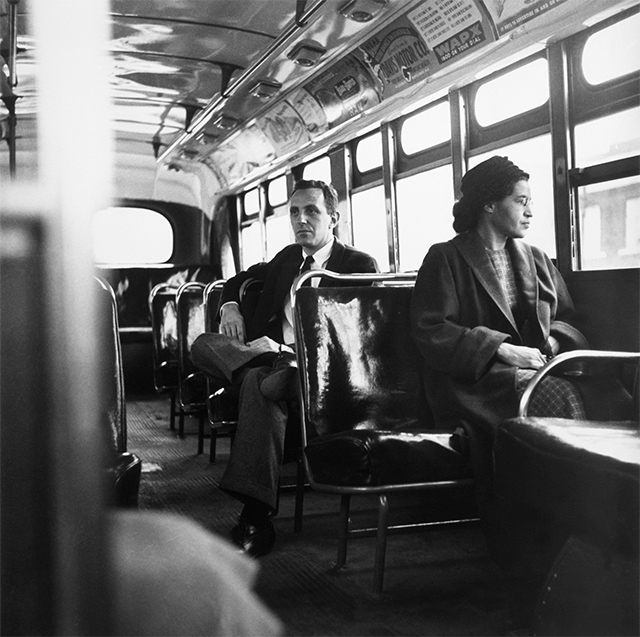 Whites in front, blacks in back: if there weren’t enough seats for whites, African Americans had to give up theirs and stand. All types of discrimination designed to make African Americans feel inferior and keep them “in their place” were practiced quite openly at the time. This bus driver hadn’t changed in 12 years. “Y’all better make it light on yourselves and let me have those seats,” he now threatened. Others stood up, but she remained unmoving.

“I could not see how standing up was going to ‘make it light’ for me,” writes Rosa Parks in her autobiography. “The more we gave in and complied, the worse they treated us.”

The tragic history of the blood and tears of millions of her fellow African Americans was behind the determination of this lone woman who refused to move. Their ancestors had been brought to America on slave ships, treated like cattle, and had lived and died amidst immense suffering. Mothers were whipped before their children’s eyes, and parents watched in hopeless despair as their children were taken from them and sold. Even after slavery was abolished, African Americans were exploited and lynched and killed with impunity.

Rosa Parks had worked with her husband, Raymond, and others to try to save such victims, but they found themselves facing a wall of racial oppression. The civil authorities, the laws, the media and the American people in general all quite blatantly trampled on the inalienable rights of their fellow human beings as if this were perfectly normal and acceptable.

Rosa Parks had had enough of the bullying. As she said, the more she endured, the harsher she was treated.

The bus driver shouted, “Aren’t you going to stand up?”

“Well, I’m going to have you arrested!” he declared.

“You may do that,” was Rosa Parks’ calm response.

A police officer arrived on the scene. When he asked her why she wouldn’t stand up, she asked in return, “Why do you all push us around?”

It has been suggested that Mrs. Parks was simply tired and that is why she remained seated. She is very clear on this point: “The only tired I was, was tired of giving in to discrimination.”

This incident set off an explosion of anger among the African-American community in Montgomery. This was no doubt largely due to the warm regard in which Rosa Parks was held, as she had long been respected as a cheerful, warm and intelligent woman. A boycott of the bus service was organized, led by the young civil rights activist Martin Luther King, Jr., and others who had long burned with a desire for change. Thousands of African Americans who had previously patronized the buses acted in solidarity. Instead of commuting by bus, they walked or car-pooled. Black-owned taxi companies also helped commuters by reducing their fares to those the buses charged. At rush hour, the roads would be lined with people singing as they walked with proud determination. For many, the distance from home to workplace was more than ten miles. But they knew that they were walking the path of freedom, the path of peace.

The story of one participant, related in Martin Luther King, Jr.’s Stride Toward Freedom sums up the spirit of the boycott:

…Once a pool driver stopped beside an elderly woman who was trudging along with obvious difficulty.

She waved him on. “I’m not walking for myself,” she explained. “I’m walking for my children and my grandchildren.” And she continued toward home on foot.

Retribution was severe. Rosa Parks was besieged with threatening telephone calls. She lost her job. The newspapers printed false rumors about her, and Dr. King’s home was bombed. In the first trial she was denied the opportunity to testify on her own behalf and was found guilty. But in the face of threats and harassment, Mrs. Parks never thought of fleeing or seeking refuge elsewhere. She was determined to hold her ground, to continue her struggle where she was.

The solidarity of this nonviolent movement remained unshaken; it pricked the conscience of America and the world.

Finally, after a year of appeals and counter appeals, the United States Supreme Court declared segregated busing unconstitutional. From that moment on, the Civil Rights movement gained tremendous momentum surging forward in a great wave toward equal rights for African Americans. 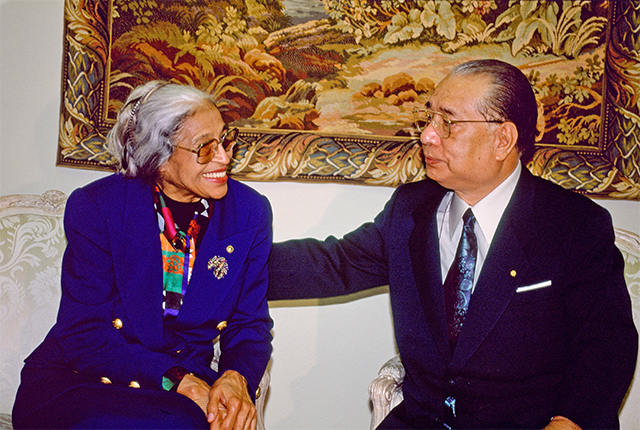 Rosa Parks and Ikeda meet at the then Soka University of America campus in Calabasas, California (January 1993)

An idea whose time has come is unstoppable. The courage of this lone woman was like a spark that set ablaze a parched field.

Also in Stride Toward Freedom, Dr. King described the role played by Rosa Parks in this way:

She was anchored to that seat by the accumulated indignities of days gone by and the boundless aspirations of generations yet unborn. She was a victim of both the forces of history and the forces of destiny. She had been tracked down by the Zeitgeist—the spirit of the time.

I have heard that, prior to my meeting with Mrs. Parks, many of the people around her were naturally wary of Japanese people because of the racist remarks made by a number of our politicians. One can imagine that all sorts of movements might try to exploit her name for their causes, so she has to be very careful.

Their concerns seemed to evaporate during her visit to the SUA campus. She arrived in the midst of the strains of “We Shall Overcome” sung by a welcoming chorus. The moment we met, I felt a spark of recognition pass between us because I, too, have spent my life working for a cause. Mrs. Parks’ determination, her tears and her hopes, reverberated in my heart. She also said that she felt she had found a new friend. I shared with her the following passage from a poem of Langston Hughes, a poem which she said had long been one of her favorites.

When I get to be a composer
I’m gonna write me some music about
Daybreak in Alabama . . .

And I’m gonna put white hands
And Black hands and brown and yellow hands
And red clay earth hands in it
Touching everybody with kind fingers
And touching each other natural as dew
In that dawn of music when I
Get to be a composer
And write about daybreak
In Alabama. 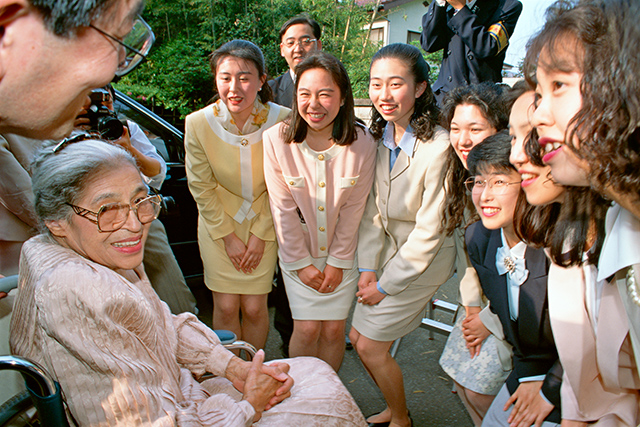 On that occasion, I invited Mrs. Parks to visit Japan, and she gladly accepted, flying to Tokyo in May 1994. This surprised many who know her, since she had never before traveled farther than America’s immediate neighbors.

During her visit to Soka University in Japan, she wept as she listened to a student chorus group. She explained that it reminded her of a young Japanese woman, a survivor of the atomic bomb blast in Hiroshima, whom she had once known in the United States. “That young woman liked choral singing, too,” she recalled. Listening to the singing of the students, she was unable to hold back her tears. Such is her gentleness and sensitivity, for she always cherishes the feelings of others.

Mrs. Parks related that it was her mother who raised her to be so strong: “My mother taught me self-respect. She always insisted, ‘There’s no law that says people have to suffer.’”

If we look across the vast landscape of history, the life of one person may seem small and insignificant. Yet, while human beings may appear to be swept up in the torrent of events, it is also clearly human beings who create history.

As Rosa Parks’ life demonstrates, the courageous cry of even a single individual standing up for justice can light a flame in the hearts of thousands and change the course of human history.