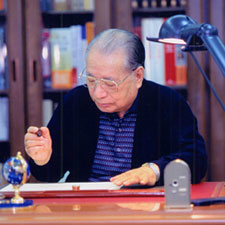 Daisaku Ikeda has authored or co-authored over 100 books. As considerable as his literary achievements are on their own terms, they are, in a broader sense, a reflection of his energetic engagement and accomplishment as a philosopher, an active proponent of peace and an educator. These are roles which Ikeda has pursued amidst his responsibilities as founding president and leader of the Soka Gakkai International, one of the largest, most engaged and diverse lay Buddhist movements in the world today.

This leads to what perhaps is the first remarkable feature of Ikeda as a writer: that he has managed to remain so prolific over a half-century career that essentially has been subsumed by his other responsibilities. His body of work--he has in some years composed over a thousand poems alone--includes dialogues, essays, peace proposals, university lectures, poetry, children's literature and articles. The bulk of it, however, has been written on the move, in trains, planes and cars, or between meetings and even over meals. He maintains this grueling pace and regimen to this day, at an age when many peers have retired.

"Writing is as precious to me as life itself," he says. "My only wish is to provide a glimmer of hope, to light the torch of courage, for as many readers as possible."

In 1965, Ikeda published the first volume of The Human Revolution, which is regarded as his magnum opus (released in Japan as a 12-volume series; and in six volumes in the English edition). A novelized account of the founding and development of the Soka Gakkai lay Buddhist association in Japan, it contains this passage that describes the core of Ikeda's philosophy: "A great revolution in just a single individual will help achieve a change in the destiny of a society, and further, will enable a change in the destiny of humankind."

Ikeda's Buddhist-inspired belief that a profound inner reformation not only enables a person to successfully form creative and constructive responses to the harsh realities of everyday life, but also enables him or her to lead contributive lives in the service of other people, is a theme that is central to all his writings.

It is this abiding faith in our shared humanity and aspiration for peace that has led him to engage in dialogues on the pressing issues facing the modern world with thinkers, activists and leaders in a variety of fields, including Linus Pauling, Mikhail Gorbachev, Ba Jin, and Hazel Henderson, among others. "Choosing dialogue is itself the triumph of peace and humanity," he writes. "That is why I have met, as one human being to another, with all kinds of people, transcending differences of nationality, ethnicity, religion, ideology, generation, gender and social position."

One of Ikeda's first extensive dialogues of this sort was with the late British historian Arnold Toynbee and was first published as Choose Life, in 1979. In it, the authors not only explore the ageless questions of life but also the most pressing issues of the modern era. Choose Life has since been translated into 28 languages. [It is one of the 21 titles featured on this website].

Included among his published dialogues are also a number of discussions with experts within the Soka Gakkai, with the six-volume The Wisdom of the Lotus Sutra, an examination of the core Buddhist scripture and the application of its principles in contemporary society, ranking in as one of his representative works on Mahayana Buddhism.

Another of Ikeda's literary focuses has been literature for young children--a genre in which he first honed his writing talents as editor of a children's magazine while in his early twenties. His employer, Josei Toda, was the second president of the Soka Gakkai, and the person who would become his lifelong mentor.

Ikeda's children's stories have been translated into numerous languages, having been introduced to the world outside Japan through the talents of acclaimed artists such as British illustrator of children's literature Brian Wildsmith. Several have been made into animated films and applauded for their positive influence on young viewers. A series of 12 of his animated stories won the 2005 Anak TV Broadcasters' Award from the Philippine-based Southeast Asian Foundation for Children's Television.

Ikeda has also earned recognition for his poetry. In 1981, he was awarded the title of "Poet Laureate" by the World Academy of Arts and Culture. One collection of poetry translated into English, Fighting for Peace, was also a finalist in the 2005 Benjamin Franklin Awards' Poetry and Literary Criticism category. The World Poetry Society Intercontinental awarded him the title, "World People's Poet" in October 2007.

Many of his works are in the traditional Japanese forms of haiku and waka, while others have been written in a longer form in which he blends poetry and a narrative structure. "I suppose there are some that, in form at least, hardly seem like poems at all," he observes. "And yet they are all frank expressions of basic human emotions, and I wonder if that is not the true definition of poetry, regardless of the form it happens to take."

Fighting for Peace is a collection of Ikeda's meditations on war and peace, expressing, from personal experience, his deep loathing of war and his anger at those in positions of authority who would sacrifice ordinary people in pursuit of selfish ends. "[Ikeda] speaks for the millions of people who have become frustrated with the lethal shenanigans of the world's politicians," says noted American writer-poet Ishmael Reed in the book's foreword. "[His] denunciation . . . is merciless."

As a young teenager amidst the turmoil following Japan's defeat in 1945, Ikeda read voraciously, searching for answers to the spiritual void rent by the war. It was through poetry that he began to express his quest and to give voice to his emotions. He joined a reading circle comprised of some 20 other youths on a similar quest for truth. It was through this group that he encountered Toda in 1947 and through him, Nichiren Buddhism.

"I had long cherished the dream of becoming a journalist and writing a great novel myself, and I wanted to work in a field related to writing, which led me to my job at Mr. Toda's [publishing] company," he recalls.

Toda, a successful reformist educator in the prewar period, also tutored Ikeda in a variety of university-level. In 1960, Ikeda succeeded Toda as Soka Gakkai president.

Inheriting the educational legacy of his mentor, Ikeda has established schools and universities in Japan, the U.S., Malaysia, Hong Kong, Singapore, South Korea and Brazil. He also founded numerous institutions to promote cultural and educational exchange, as well as engaging in interfaith and intercivilizational dialogue and other peace-related research. The Soka Gakkai is today a global movement, with some 12 million members in 192 countries and territories.

Perhaps the greatest impetus to the development of his writing, Ikeda says, has come from his efforts to offer personal encouragement to others, firing off a letter or poem between engagements, whether in Japan or abroad. "It was not some intellectual pastime," he explains. "It was a spiritual struggle amid harsh reality, a struggle in which I concentrated my mind to the task of drawing forth a thread of the most appropriate words to encourage and inspire each recipient."