Buddhism and the Lotus Sutra

"In general, Buddhism is viewed as a static religion, epitomized by the image of a meditating or sitting Buddha, but the true image is one of a dynamic walking Buddhist, an active Buddhist. The Buddha is another name for a person of unceasing struggle [who] continuously takes action to construct happiness for people."­1--Daisaku Ikeda

The Essence of Buddhism 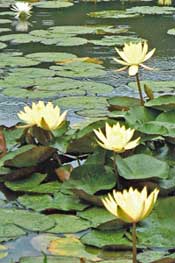 Named after the flower, the Lotus Sutra provides solutions to life's manifold sufferings.

Buddhism is a 2,500-year-old religious philosophy, though it is only during the last century that it has become widely known outside of Asia.

Though there are many different schools and traditions of Buddhism, all are said to stem from the teachings of Shakyamuni, Buddhism's founder (circa 500 BCE). Different schools arose over the centuries as Buddhism spread throughout Asia and interacted with the various cultures of the continent. Differences between these schools often reflect cultural, social and historical conditions and influences. An ideal common to Buddhism in all its various forms, however, is liberation from suffering.

Buddhism began as a personal response to human suffering. It was Shakyamuni's search for a way to free people from the inevitability of suffering that led to his enlightenment or "awakening." According to tradition, this awakening occurred while Shakyamuni was seated in meditation under a pipal tree. He perceived clearly how all phenomena are ceaselessly changing within a complex web of mutual interrelationship. He saw that underlying and guiding this process of ceaseless change was an enduring law or principle, which is inherent within all life and phenomena--including, of course, the lives of human beings. By awakening to this law and grasping the true nature of life, Shakyamuni taught, people could free themselves from anguish and bring their lives to a full and creative flowering. The life of a person thus awakened would be characterized by compassion and an encompassing wisdom.

Since this law does not exist separately from our own lives, Buddhism sees the ultimate truth or value in human life itself. There is no transcendent value or power that can justify the sacrifice or denigration of human life.

In Buddhism, compassion is inseparable from enlightenment. In the tradition of Nichiren Buddhism practiced by members of the SGI, courage is seen as concomitant with true compassion. Courageous action to challenge and transform our individual and collective realties is seen as essential to breaking through fundamental delusions. This dynamic linkage of inner change and concrete action to bring a better world into being is at the heart of Nichiren Buddhism. Ikeda stresses this as the core formula for human revolution.

Ikeda's philosophy can thus be understood as an effort to develop a means for contemporary humanity to confront the rampant suffering of our age and to make the social and cultural diversity of our world a source of creativity and joy for all.

Shakyamuni's teachings have been preserved in numerous collections called sutras. Among these, one of the most widely influential has been the Lotus Sutra. This sutra is the basis of Nichiren Buddhism and Daisaku Ikeda's philosophy. 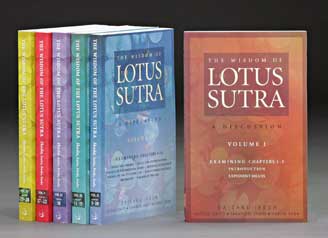 Ikeda offers modern and meaningful insights in The Wisdom of the Lotus Sutra.

Concepts such as the eternity of life, the interdependence of all life and the sanctity of all life receive particular emphasis in this sutra. One of the most important ideas clarified by the Lotus Sutra is the principle of the fundamental equality of all people--including women, "evil people" and others often discriminated against in other teachings. The basis of this equality is the universally inherent potential of all people to manifest the life condition of Buddhahood or enlightenment. From the perspective of the Lotus Sutra, Buddhahood is not some final static state of attainment but a potential that all individuals can bring forth from their lives. It is the dynamic unfolding of the qualities of wisdom, compassion and courage amid the realities of the lives of women and men. The objective of Buddhism is to bring forth this inherent potentiality.

Among Ikeda's writings on Buddhism, that which deals most extensively and specifically with the Lotus Sutra is the six-volume The Wisdom of the Lotus Sutra series. In this work, Ikeda, in dialogue with members of the SGI's study department, explores the relevance of the sutra to today's world and unpacks its profound principles from the perspective of Nichiren Buddhism.

In essence, the Lotus Sutra could be described as a proclamation of the infinite potential and dignity inherent in the life of each human being. It is a guide to unleashing the transformative potential of each individual's life.

Ikeda's philosophy could in turn be expressed as, first, the effort to clarify and apply these principles within the context of contemporary society, and further, through the practice of dialogue, to clarify shared, universal human values that accord with the core value of the sanctity of life; and finally to promote mutual understanding, cooperation and peace as the basis for a new human civilization.