A Global Network of Humanistic Education 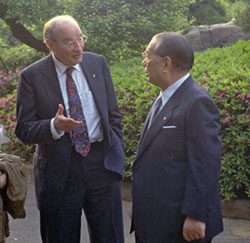 With Professor John D. Montgomery of Harvard University (Hachioji, May 1992)

Education has a profound mission within society, in Ikeda's view. It is "not simply the transmission of knowledge. It is not simply the development of talent. Education is a great enterprise of steadily and surely passing on the fullness of humanity . . . Education is a process of becoming fully human."2

The values that underlie education, he observes, shape individuals and society, for better or for worse. The development of a humanistic, nurturing society largely depends on a humanistic orientation in education, one that directs students toward the richness of their inner lives and the interdependence of their lives with the lives of others and with the planet itself. Indeed, the rampant exploitation of people and of the natural environment, so characteristic of our global society today, can be seen as a direct failure of education.

From Ikeda's perspective, the reformation of education is integral to the establishment of global peace. For this reason, his educational endeavors have not simply been limited to the development of the Soka education system but encompass various efforts to promote humanistic education on a global scale.

Many of Ikeda's dialogues with educators and thinkers from around the world are examples of this.

Meanwhile, the Ikeda Center for Peace, Learning, and Dialogue (founded by Ikeda as the Boston Research Center for the 21st Century), works in collaboration with academics and activists, around themes of education, academics and social issues.

Ikeda has also delivered addresses at institutes of higher learning in some 30 countries around the world. His 1996 address at Teachers' College, Columbia University, for example, discussed many of these themes.

Ikeda's more than 370 academic honors from universities in more than 50 countries are further indication of the extent of the influence of Ikeda's thought and activity. 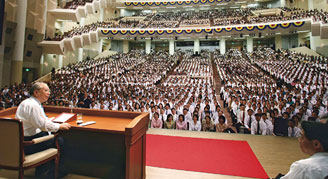 An academic ceremony at Soka University, May 2007.

Harvard University Professor John D. Montgomery's observation in this regard is revealing, pointing to what is in effect Ikeda's quintessential gift as an educator: "Daisaku Ikeda's unique gift is his ability to establish direct personal connections with others, a talent that few great men can claim. It is the foundation upon which he has provided a powerful motivation for others to recreate themselves by transcending their finest talents and dedicating themselves to higher purposes. The unmatched Ikeda record of honors and recognition . . . were based not only on his writing and his sense of mission, but also on his ability to reach deep into the hearts of others that for me is his most characteristic feature."3

2 Ikeda, Daisaku. 2006. "The Dawn of a Century of Humanistic Education." In To the Youthful Pioneers of Soka: Lectures, Essays and Poems on Value-Creating Education, p. 156. Japan: Soka University Student Union.