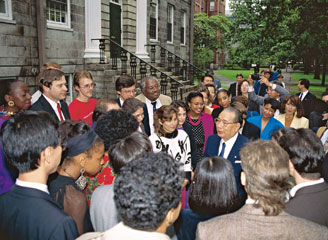 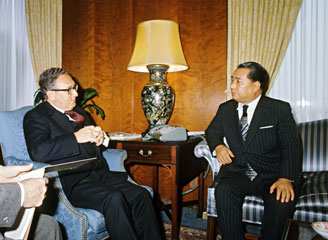 With then-U.S. Secretary of State Henry Kissinger at the height of the Cold War (Washington, D.C., 1975)

Dialogue as the Path to Peace

"So long as human history continues, we will face the perennial challenge of realizing, maintaining and strengthening peace through dialogue, of making dialogue the sure and certain path to peace. We must uphold and proclaim this conviction without cease, whatever coldly knowing smiles or cynical critiques may greet us."1--Daisaku Ikeda 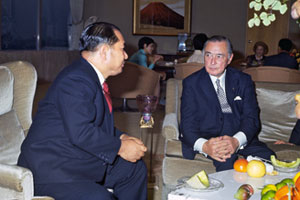 In 1960, at the age of 32, Ikeda became third president of the Soka Gakkai. The next decade saw a tremendous expansion of the organization, accompanied by growing controversy over the sudden emergence of this "new" religious movement within Japanese society. Despite the enormous pressures of his role, Ikeda almost immediately began to vigorously explore courses of social action in accord with his conviction that the true value of religion is expressed in a sustained commitment to establish peace, happiness and empowerment for all people.

At the core of Ikeda's peace philosophy is his belief in the power and possibilities of dialogue, a belief that he has advocated and explored at length in his writings.

His belief in the efficacy of dialogue in many ways reflects and is inspired by the great tradition of nonviolent philosophers that include Mahatma Gandhi and Martin Luther King Jr. Like his predecessors, Ikeda's belief in dialogue is based on a deep faith in humanity and a pragmatic recognition of the inability of violence to produce lasting positive change. Lawrence E. Carter Sr., Dean of the Martin Luther King Jr. International Chapel at Morehouse College and disciple of the civil rights leader, has called Ikeda the individual who is doing the most to put into practice the philosophy of King and Gandhi on the global stage.

In the mid-1970s, Ikeda began traveling to meet with the leaders of the Eastern and Western blocs to promote and encourage dialogue.

As he writes, the numerous problems we confront "are caused by human beings, which means that they must have a human solution. However long the effort takes, so long as we do not abandon the work of unknotting the tangled threads of these interrelated issues, we can be certain of finding a way forward. The core of such efforts must be to bring forth the full potential of dialogue."2

This faith in dialogue is one that Ikeda has tested and developed over the past four decades in his meetings and discussions with hundreds of individuals--principal figures from around the world in the humanities, politics, economics, science, culture and the arts.

An important inspiration for Ikeda's pursuit of dialogue came from the British historian Arnold Toynbee (1889-1975). Ikeda and Toynbee met and held discussions in London in 1972 and 1973. Toynbee is known for his view of history that highlighted the role of religions, in particular their power to motivate people to respond to challenges, and he viewed Buddhism as a philosophy suitable to the context of contemporary civilization and its problems. He invited Ikeda to London for a discussion on approaches to such problems, and the fruits of their four-day dialogue and subsequent written exchanges were published first in Japanese and then in English, as Choose Life, in 1976.

Toynbee encouraged Ikeda to seek out other cultural and academic figures as partners in dialogue on the pressing issues of modern civilization. During their final meeting, he presented Ikeda with a list of notable individuals within the international intellectual community whom he urged Ikeda to contact.

Ikeda continues to maintain a busy schedule of engagements and discussions with individuals from around the globe. Many of his dialogues have been published in book form and translated into various languages. Recent publications include dialogues with peace activist Elise Boulding, futurist Hazel Henderson, Nobel Peace Prize laureate Sir Joseph Rotblat and former Soviet President Mikhail Gorbachev. These dialogues represent a broad-based search for universal human values and ways of bringing humanity's richly diverse traditions of wisdom to bear on the challenges confronting our global society.

The significance of Ikeda's dialogic efforts with key figures in China, the USA and the Soviet Union during the Cold War has become more apparent in a retrospective view of the history of that era. Likewise, Ikeda's role in contributing to the normalization of Sino-Japanese relations starting in the 1960s is now widely acknowledged.