A Culture of Dialogue

Ikeda: Culture, and music in particular, has a mysterious power to cement person-to-person ties and nourish friendship between countries. You have written many books dealing with music. The following passage particularly impresses me.
"Music is our oldest form of expression, older than language or art; it begins with the voice, and with our overwhelming need to reach out to others." . . .

Menuhin: Music is one of the very few fields in which there is no feuding or quarrels. Of course there may be antagonism or competition between individual artists. But the audience is united as one with the musician. Music binds and harmonizes the performers and the members of the audience.

Ikeda: I understand your meaning. By nature Buddhism also unites people together; it is not something that creates divisions between them.
You also state that music creates order out of chaos. I am confident that a new order of peace can be produced through the beautiful solidarity of ordinary people who love music.

Menuhin: My feelings are the same.″1 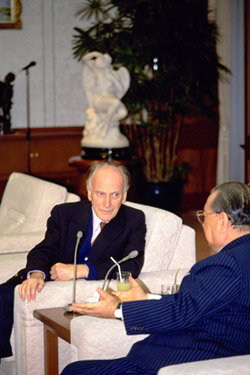 If cultural exchange can create a basis for peace, Ikeda has pursued the same effect through his strenuous efforts to meet and engage in dialogue with representative individuals from around the world. (See Cultural Exchanges for Peace:Cuba)

Among these dialogue partners are many cultural figures who also represent a great diversity of artistry. The list includes Argentinian tango maestro Osvaldo Pugliese; American ballet dancer, choreographer and director of the Hamburg Ballet John Neumeier; British artist and illustrator Brian Wildsmith; and American jazz icons Herbie Hancock and Wayne Shorter; as well as writers and novelists such as Chingiz Aitmatov of Kyrgyzstan, Wole Soyinka of Nigeria and Ba Jin of China.

The impulse for these dialogues is expressed succinctly in remarks by Ronald A. Bosco, Distinguished Professor of English and American Literature at the University at Albany, State University of New York, speaking of his three-way dialogue with Ikeda and the literary scholar Joel Myerson, recorded in the book, Creating Waldens (Dialogue Path Press, 2009): "And is this not, after all, the truest purpose of conversation? To bring together individuals from various walks of life through ongoing conversation so that they may achieve an honest understanding of one another's minds, hearts, and aspirations, and thereby transcend those boundaries of national origin, education, politics, and class that too often separate people from one another rather than join them together as citizens of one human race?"2

And in an instructive comment on the tenor of such dialogue, Bosco continues, "Our purpose throughout [these] conversations . . . has never been to persuade one or the other of us to a particular point of view but to share our respective thoughts on the luminaries and sources of spiritual wisdom . . . that have shaped our minds . . . and touched our hearts."3

One outcome of these meetings has been a series of essays by Ikeda, exploring the character and unique contributions of many of these individuals, their struggles and insights. In this way Ikeda is able to explore and share with a broad audience rich examples of the blossoming of humanity through creative struggle.

Such creative struggle is the very essence of life--the struggle to triumph over life's vicissitudes, the struggle to expand the dimensions of one's inner being, to be all that we can be. Artistic endeavor is but one focused expression of such struggle. In Buddhist terminology, this struggle is the struggle of one's "human revolution," the individual turning of the wheel that sets in motion greater transformations within society and the world.

As Ikeda remarks: "A grand orchestra of humanity, a symphony of love--made up of peace, culture and education--will develop and expand on the basis of the human revolution in the life of one person after another. This is the movement based on the true Buddhist teaching that we in the SGI are seeking to promote."4