Mother of Peace, Mother of Culture

A rage that will never be quenched burns in the heart of Maria Teresa Escoda Roxas of the Philippines. "My mother was taken away before my very eyes. Japanese military police suddenly burst into our home carrying rifles. I was 16. I will never forget that day, August 27, 1944." 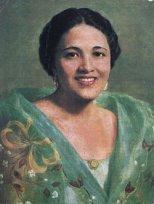 Josefa Llanes Escoda
[Courtesy of the Girl Scouts of the Philippines]

Her mother, Josefa Llanes Escoda, was a noble woman, almost an angel. She devoted herself to helping others, never expecting anything in return. Even under the Japanese military occupation of her country, she showed no fear, visiting and helping Filipino and American soldiers in detention camps and prisons. Although those around her tried to persuade her to stop, she refused. "I am not afraid to die," she declared. "I will risk it because our soldiers badly need aid."

Mrs. Roxas recalls, "The Japanese military police spoke politely, but they forced my mother to go with them. My mother was taken out of the house, one soldier accompanying her on each side, and put into a car. She was taken to Fort Santiago, which at that time was being used as a prison . . . That was the last time I ever saw her."

The three Japanese military police still in the house began searching it, looking for any evidence of anti-Japanese activities. "I think the Japanese military became angry when they discovered my mother was helping not only Filipino soldiers but American soldiers as well," says Mrs. Roxas. "But she said: 'If the shoe were on the other foot and the Japanese soldiers were the ones suffering in prison, I would help them in the same way. I would do what I have to as a human being.' My mother was a true humanitarian. She wanted to offer help, without discrimination, to all who were suffering. But the Japanese militarists did not understand her actions."

Mrs. Escoda was what we would call a bodhisattva in Buddhism. And her love was not reserved for human beings alone. If a carriage driver began to mercilessly whip a horse, Mrs. Escoda would not hesitate to reprimand him.

During the Japanese occupation of the Philippines, the military forced all Filipinos to bow their heads when encountering a Japanese. If they failed to do so, they were slapped across the face in public. The Filipinos remember the occupation as a period when the entire country was transformed into a terrifying concentration camp. The Japanese committed horrific atrocities, such as tossing Filipino children up in the air and piercing them with their swords as they fell back to Earth. 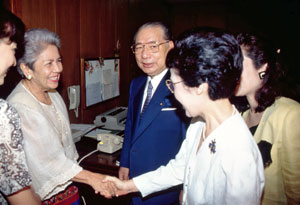 Mrs. Roxas meeting Daisaku and Kaneko Ikeda in Manila (May 1993)

The attitude of the Japanese militarists was exactly the opposite. Whereas Mrs. Escoda did not care about a person's nationality, judging people solely on their worth as human beings, for the Japanese, the most important thing was whether a person was Japanese or not; that he or she was a human being was only remotely important. That is how they were able to justify the unspeakably cruel acts they perpetrated on the Filipinos. They treated the Chinese and the Koreans as well as the people of Okinawa the same way.

Any Japanese who resisted or criticized those unspeakable acts was attacked as unpatriotic--as was the case with Tsunesaburo Makiguchi and Josei Toda, the first and second presidents of the Soka Gakkai. Both of them were in prison in Japan at the time that Mrs. Escoda was taken away by the Japanese military police in the Philippines. They were all victims of Japanese militarism.

Oppressors who live by lies, discrimination and raging ego pitted against people's movements driven by truth and humanity--the struggle between these two forces continues to this day.

Mrs. Escoda's conviction, her determination to live with unwavering humanity, remained unchanged even in prison. In an attempt to obtain information about the anti-Japanese movement, the Japanese cruelly tortured her, leaving her battered and bleeding. But she didn't say a word.

On occasion, her captors would withhold food for as long as a week. Even then, she would talk to her fellow prisoners of her plans for the future, of her hopes for the development of the organizations she had founded--including the Girl Scouts of the Philippines and the National Federation of Women's Clubs--and that her two children would have the opportunity, as she had when she was young, to study in the United States.

Whenever she received food or water from outside, she shared it with the other inmates, although, of course, she must have been extremely hungry herself. "I'm fine. You eat!"--these plain words brim with more goodness and humanity than any famous words of wisdom.

At the beginning of 1945, Mrs. Escoda and her husband, a journalist who had been arrested several months earlier, were taken from their cells and executed. To this day, the method of execution remains unknown. "I don't even know where they are buried," laments Mrs. Roxas. But before she died, Mrs. Escoda smuggled out a message: "I have done my duty . . . If I fall and you happen to survive, tell our people that the women of the Philippines did their part in sustaining the sparks of truth and liberty till the last moments."

Nothing is more eloquent than the silence of death--especially if it is that of a martyr who has given his or her whole being to the cause of freedom. Mrs. Escoda died for the great cause of keeping the flame of liberty alive. She laid down her life so that truth might live. Her life was brief; she died at the age of 46. But even today her example cries out in a silent appeal, inspiring others. Mrs. Escoda's picture appears on the 1,000-peso banknote--the highest denomination of Philippine currency--and many streets proudly bear her name. 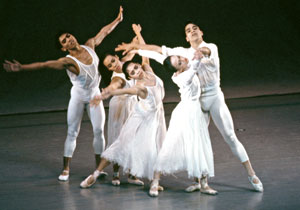 The Ballet Philippines' performance in Japan in 1993

And most important, she has energetic spiritual successors in the form of her son and daughter. People whom she had helped later assisted her children, raising money to make it possible for them to study in the United States. One of the dreams that Mrs. Escoda had cherished in prison was thus realized. And today Mrs. Roxas is energetically carrying on her mother's work.

Mrs. Roxas was weak and sickly as a child, so her mother encouraged her to study ballet to strengthen her constitution. Later, she became the president of the Cultural Center of the Philippines. The goals of the Cultural Center are to foster creative activities, keep traditional culture alive and sponsor cultural exchange programs with other nations. As its president, Mrs. Roxas created a lasting legacy.

With regard to Japan, she has remarked that Japanese and Filipinos hold distorted views of each other, and expressed her determination to change that. She told me: "The only faces of Japan that the peoples of Asia know are those of militarist Japan during World War II and a contemporary Japan that is an economic superpower and cares only about profit. Japan should present other faces to its Asian neighbors. Japan needs people who will promote cultural exchange."

She also remarked, "For many, many years, I was not able to accept the Japanese. But my feelings changed when I accompanied my husband to Japan on a business trip and encountered Japan's traditional arts. I came to love Japanese arts and, through them, at last, to open my heart to the Japanese people. Art can lead us to transcend intense emotions and animosities. Culture is the strongest tie that can bind human beings together."

Our talks together resulted in a Japanese tour of the Ballet Philippines, which is affiliated with the Cultural Center, sponsored by the Min-On Concert Association in 1993. The troupe is unsurpassed in Asia and it has been praised the world over. An American newspaper once said that it was "worth walking 100 miles" to see them perform.

Mrs. Escoda was a mother of peace, who loved culture; Mrs. Roxas is a mother of culture, who loves peace. Will the cries of this mother and daughter across two generations ever reach Japan? Or will cowardly arrogance lead Japan once again to ruin as a "soulless nation"? Our neighbors in Asia are watching to see which path Japan will take.