"Education is in no way limited to classrooms but is a mission that must be undertaken and realized by human society as a whole. We must now go back to the original purpose of education--children's lifelong happiness--and reflect upon the state of our respective societies and our ways of living."1--Daisaku Ikeda 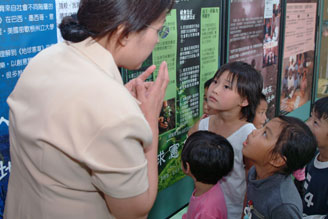 "Serving the Essential Needs of Education" (2000) and "Reviving Education" (2001), two recent educational proposals, present some of the key ideas that Ikeda has been discussing since the 1970s. These proposals respond to particular issues within the Japanese educational system but are addressed to a broader audience and discuss ideas relevant to education in general.

The former, for example, takes as its point of departure the rise of violence and delinquent behavior within Japanese schools and examines this as a reflection of trends within adult society. It explores a paradigm shift from the idea of education serving the needs of society to that of a society that serves the essential needs of education.

In a society that serves education, learning is regarded as the very purpose of human life-that which makes human beings truly human--rather than simply a means to an end, a way to make people useful to or competitive within society. When education is treated as a means rather than an end, this "reinforces a utilitarian view of human life itself . . . A certain type of personality, not the full development of personality, has been sought, as if casting individuals from a uniform mold."2

In this proposal, Ikeda also explores ways of promoting the independence of education from political influence "as a means to prevent a loss of continuity in educational policies in the event of changes in the administration and to avoid arbitrary reforms caused by political interference." He suggests giving education a status and independence equal to that accorded the executive, legislative and judicial branches of government. Previous proposals along these lines have included the establishment of a "United Nations of Education" that would work toward making education independent of political interference throughout the world.

Ikeda has also made various other proposals to support global cooperation on education. These include a world charter on education, an International Conference of University Presidents, and a World Federation of Student Associations, which would bring students of various nations together.


1 Ikeda, Daisaku. 2000. "Building a Society Serving the Essential Needs of Education--Some Views on Education in the Twenty-first Century" Toward a Century Radiant with the Smiles of Children." https://www.sgi.org/about/president/works/proposals/ed2000.html (access October 15, 2007).