In 1957, Toda's goal of 750,000 households had been surpassed. In the space of a mere six years the Soka Gakkai had grown from an unknown "new" religion into a major social force within Japan. 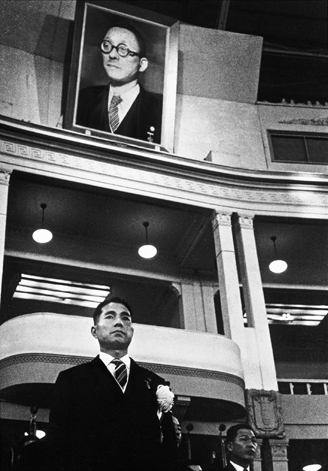 Ikeda's inauguration as third president of the Soka Gakkai

In 1958, Josei Toda passed away. In May 1960, Ikeda succeeded him as third president of the Soka Gakkai. He initially refused the executive directors' requests that he do so, knowing that the responsibility of leading the burgeoning movement would require a staggering commitment that left no space for any personal concern.

The following entries from his diary reflect this struggle:

"Monday, April 11; sunny--A critical meeting to decide the third president. Though I have declined several times, will I have no choice in the end but to make up my mind and accept? The tension I feel defies expression."1

"Tuesday, April 12; overcast--My health is not good. Was told of members' pleas for me to assume the presidency. I turn them down."2

"Thursday, April 14; rain, then sun--I can no longer refuse their request. It is unavoidable. Alone, I grieve over Mr. Toda. Alone, I have decided."3

In his speech at the inauguration ceremony he told the 20,000 Soka Gakkai members gathered there, "Although I am still young, as a disciple of President Toda, I am resolved to take the lead, toward realizing world peace."4

Ikeda recalls how, on his return home on the day of the inauguration ceremony, Kaneko, his wife, showed no sign of being in a celebratory mood. When he asked her why, she replied that there would be no celebration since the day marked the funeral of the Ikeda family. This sobering remark was at one level a tacit declaration of her resolve to completely support her husband on the new path that their lives had taken.