"Education makes us free . . . It is through education that we are liberated from powerlessness, from the burden of mistrust directed against ourselves. The individual who has been liberated from self-doubt, who has learned to trust in him- or herself, is naturally able to believe in the latent capacities of others. Education enables us to look beyond superficial difference to perceive the great earth, the great sea of life that sustains us all."1 [Read full text]

"Education deals with the essence of what it means to be human. No undertaking is more valuable, more sacred."2--Daisaku Ikeda 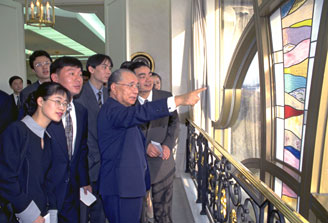 Ikeda with exchange students from China studying at Soka University

Daisaku Ikeda is the founder of the Soka education system, which encompasses kindergartens in five countries, elementary to graduate study in Japan and an international university in the USA. [list] Soka (literally "value-creating") education is a student-centered educational approach based on the educational philosophy of Soka Gakkai founding president Tsunesaburo Makiguchi (1871-1944). A schoolteacher and principal by profession, Makiguchi devoted his life to developing a humanistic education system that would stimulate and encourage each child's unique creative potential and empower his or her lifelong growth and development. While the outbreak of World War II prevented Makiguchi from seeing his ideas to fruition, Ikeda has succeeded in fulfilling Makiguchi's dream of creating a flourishing educational system that has the happiness of children as its core objective. Both in his success in drawing attention to the ideas of Makiguchi, and in promoting humanistic education in his own right, Ikeda's contributions in the field of education are substantial.

Ikeda's achievements as a philosopher, writer, peacebuilder and school founder, as well as leader of the Soka Gakkai Buddhist movement, represent a startling diversity of activity. There is, however, a common basis to all of these endeavors: this is Ikeda's passionate commitment to people's empowerment, rooted in an unyielding faith in the positive potential inherent in the life of every person. Accompanying this faith is Ikeda's conviction that peace is ultimately inseparable from enabling the flourishing of each person's individuality.

Concern for the growth and happiness of others is, in Ikeda's view, the essential spirit of education. Education is about "believing in people, believing in some rich unknown quantity and drawing this out."3 In this sense, all of Ikeda's diverse activities come into the clearest perspective when they are viewed through the lens of his commitments as an educator in the broadest sense of the term.

The Soka school system founded by Ikeda and the Soka Gakkai Buddhist movement that he leads are distinct from each other. Soka schools are secular institutions, open to all students and offering no religious instruction. However, the humanistic ideals and concerns that guide and invigorate both the SGI and the Soka schools--the happiness and empowerment of individuals and their orientation toward peace--are the same.

Similarly, Ikeda's influence as an educator is evident in the many other contexts in which he works--as a writer, as a Buddhist mentor, in the nature of his published dialogues. This is particularly evident in those activities and interactions that engage youth. Ikeda's influence as an educator, in other words, should be considered not only in terms of his specific contributions as the founder of a school system.