"What we need most is to restore and revive our humanity. We must create a society where people can live with dignity, a society where people can live in peace and happiness. People are tired of games played for power and profit. People are tired of hatred and conflict. They want to live with more wisdom, confidence and in peace. It may seem like a long and distant path, but I am convinced that the twenty-first century must see a movement to sow the seeds of peace, happiness and trust in every person's heart. The seeds of a truly humane way of life. I am convinced this is the only path." 1--Daisaku Ikeda 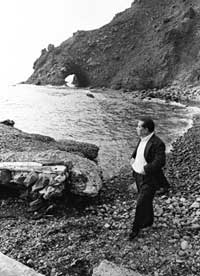 Ikeda visiting the birthplace of his mentor, Josei Toda, who first developed the concept of human revolution.

If faith in people's fundamental capacity for change is the essence of Ikeda's Buddhist humanism, "human revolution" is the concept that describes the mechanism of this change. It is the belief that self-motivated, positive change within the inner life of an individual will bring about a change in one's environment--a process that will ultimately effect a change in society.

Ikeda sees the process of individual human revolution as ultimately the only way in which lasting peace can be established. "Each [revolution] has its own significance and, often, necessity. But no matter what one changes, the world will never get any better as long as people themselves--the guiding force and impetus behind all endeavors--remain selfish and lacking in compassion. In that respect, human revolution is the most fundamental of all revolutions and, at the same time, the most necessary." 2

Human revolution is not something extraordinary or divorced from our daily lives. It begins with an individual identifying and challenging those things which inhibit the full expression of his or her positive potential and humanity, such as fear, laziness and arrogance. And it is a process that takes place amidst the particular challenges of an individual's day-to-day reality. It is, however, about raising one's awareness, "expanding your gaze beyond your restricted, ordinary, everyday world and striving for and dedicating yourself to achieving something more lofty, more profound, more all-embracing.”3 This process can be described as a transformation from a self bound by self-concern and the ego to one characterized by altruism and the wisdom that accompanies genuine concern for others. 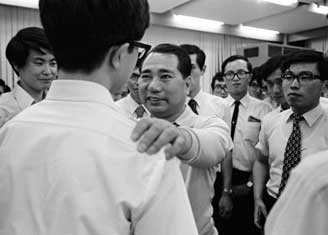 In Ikeda's philosophy, it is the transformative capacity of the individual that holds the key to broader social change.

The concept of human revolution can also be seen as a contemporary and practical description of the process of "enlightenment"--an ideal that is core to Buddhism but has often proved ill-defined and elusive.

"Some people say the prevailing mood in the world today is one of powerlessness . . . Decisions about political, economic and environmental issues all seem to be made somewhere beyond our reach. What can the individual accomplish in the face of the huge institutions that run our world? This feeling of powerlessness fuels a vicious cycle that only worsens the situation and increases people's sense of futility. At the opposite extreme of this sense of powerlessness lies the Lotus Sutra's philosophy . . . that the inner determination of one individual can transform everything; it gives ultimate expression to the infinite potential and dignity inherent in each life."4

Ikeda asserts that structural changes--changes in political and social institutions, for example--will ultimately fail in their attempts to bring lasting benefit to humankind unless they are driven or accompanied by the internal reformation of the individual. Herein lies the function and value of spirituality--the ability to initiate positive change from within the life of the individual.