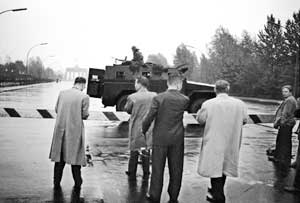 In 1961, following his visit to the U.S., Canada and Brazil the previous year, Ikeda turned his focus to the East Asian continent, traveling to Hong Kong, Sri Lanka, India, Myanmar, Thailand and Cambodia. Here there were no SGI members, but Ikeda wished to understand the conditions and realities in these countries. The same year Ikeda also traveled to countries in Europe, visiting, among other places, the Berlin Wall.

Ikeda's trip to Asia was also a practical step in response to the wishes of his late mentor, Toda, who, having lived through the era of Japan's imperialist expansion, was passionate that his disciples work to establish peace in Asia. During the trip, and particularly during the visit to Bodhgaya, the site in India traditionally regarded as the place where Shakyamuni attained enlightenment, Ikeda began to ponder the idea of establishing an institution dedicated to research into Asian philosophy and thought traditions as a means of promoting dialogue and peace. The following year he established the Institute of Oriental Philosophy to pursue this vision. 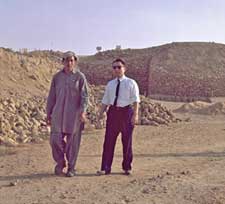 In 1963 Ikeda established the Min-On Concert Association, giving fuller expression to his vision of fostering peace through cultural and artistic exchange.

Throughout this time Ikeda was simultaneously devoting tremendous effort to support the membership of the Soka Gakkai, traveling around Japan and meeting with members, delivering speeches, writing and lecturing on Buddhist teachings, plotting the development of the organization, nurturing young leaders. These efforts saw the organization's membership in Japan triple to more than 3 million households in the period between 1960, when Ikeda was inaugurated as the organization's third president, and 1964--a monumental achievement. 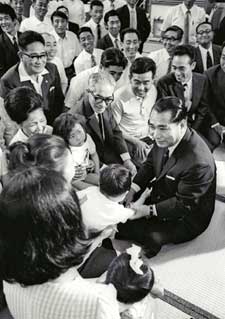 Ikeda's exhaustive efforts to travel throughout Japan and meet one-on-one with Soka Gakkai members laid the foundation for the remarkable expansion of the organization.

Kaneko, his wife, recalls that Ikeda was frequently so exhausted on his return home at the end of the day that he could barely muster the energy to remove his shoes. Such intense effort has been the hallmark of Ikeda since his youth. One visiting scholar, for example, has described the deep impression made on him by Ikeda's clearly drained and exhausted bearing when the two of them left a Soka Schools ceremony together. Only moments before he had been caught up in the joyful, energized atmosphere that Ikeda had created as he addressed the students as the schools' founder, joking with and encouraging the participants. The contrast, he relates, moved him profoundly, giving him a glimpse of the enormous commitment and energy that Ikeda invests in his interactions, which, to others, can appear as simply effortless charisma.

A quality of Ikeda's that is frequently remarked upon is his ability, amidst the constant pressure of his engagements and commitments, to give his utmost attention and concern to whoever is in front of him at that moment. His consistent effort to seek out and encourage those individuals outside of the limelight on any particular occasion is another manifestation of the detailed concern for others that--as much as his ability to offer others hope through his profound grasp of Buddhist principles and human character--has won him the deep admiration of so many.

More than any intangible charismatic quality, it is the humanistic, hands-on style of leadership that Ikeda practices and teaches, together with the tremendous amount of energy he brings to all of his commitments, that defines him.