The Spirit of Reverence for Life 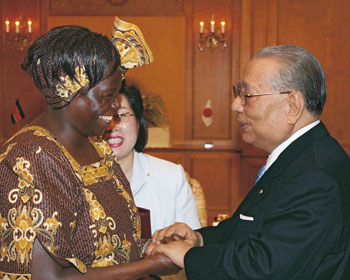 Dr. Wangari Maathai is traveling around the world urging the importance of protecting our natural environment with the rallying cry mottainai. Why has this Japanese word--which means, "What a waste!"--so captured Dr. Maathai's imagination? The moment I saw her beaming, forthright smile at our meeting in February 2005, I understood immediately: because she is a mother--a representative of all the mothers of Africa.

Dr. Maathai is also known as the mother of the Green Belt Movement, a grassroots movement to plant trees in many African countries. In the past 30 years, poor rural women have joined Dr. Maathai in planting more than 30 million trees across Africa. They are women who must rise early in the morning and walk many miles each day, their infant children strapped to their backs, in search of water and firewood. This movement to make their lives easier and at the same time protect the natural environment is indeed a movement of mothers, for mothers and by mothers.

It's only to be expected that Dr. Maathai, who has led such a movement for decades, should be impressed by the wisdom of Japanese mothers as exemplified by their byword, mottainai.

For people of my generation, who lived through World War II, the word mottainai reminds us of our mothers. Any scrap of food left over from our dinner or its preparation was transformed by our mothers' hardworking hands into a delicious home-cooked treat to fill the stomachs of her growing children. She pickled the leaves cut off the top of radishes, chopped vegetable peelings into a tasty side dish, and served us leftover grilled fish as our afternoon snack. Kids were proud to wear pants with patches their mothers had sewn on their knees. Mothers were masters of a science of nutrition based on love, a home economics based on thrift and ingenuity.

The spirit of loving care that precluded wasting anything was one of Japan's most admirable virtues in those times, and it was intimately linked to a nurturing ethos of reverence for life and consideration for others. I am sure I am not alone in lamenting the loss of this spirit as one reason behind the loss of humanity so painfully evident in our world today.

My wife, who also experienced the privation of the war years, has always striven to be thrifty and economical in managing our household. She never wastes so much as a grain of rice, and any leftovers from dinner are certain to make a second appearance at another meal. Recycling is second nature to her, and she has always saved things like wrapping paper and ribbon for reuse.

These examples of everyday ingenuity and resourcefulness may seem slight or negligible, but mothers of the world have used this homespun wisdom and love as effective tools for sustaining their families and improving their lives.

My mentor, second Soka Gakkai president Josei Toda, wore and treasured throughout his life a thickly padded jacket his mother had sewn for him. When he left his remote hometown in northern Japan and went to Tokyo at the age of 19, his mother said to him: "No matter how badly things seem to be going, if you wear this jacket you'll be able to accomplish anything." Mr. Toda never forgot his mother's deep love for a moment. Whenever he found himself facing daunting adversity, he rallied his spirits with the determination to demonstrate his gratitude for his mother's love, telling himself, "I'll be fine as long as I have this jacket." 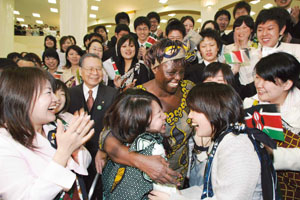 Dr. Maathai also conceived of her Green Belt Movement out of compassion and concern for the future of her children and her homeland of Kenya. She applauds the noble, ordinary women who participate in the movement as "foresters without diplomas." Their committed solidarity and steadfast efforts in their communities are not only preventing the desertification of Africa but also raising consciousness of environmental issues in the minds of people the world over. Their service to humanity and the Earth far exceeds that of any national leader. Lawmakers should take note of this fact, recognizing the wisdom, spirit and actions of the people with the respect they deserve. Unfortunately, however, the elite who lead the world's nations--the politicians, the bureaucrats, the academics--tend to look down on such popular movements.

In a speech given in February 2006 at Soka University, Dr. Maathai said that politicians inevitably try to take advantage of the people, and so it is vital for the people to prevent that by involving themselves in government. This is indeed true. I believe that democracy in the 21st century needs to be based upon learning from the wisdom of mothers, the representatives of the people, and putting the intelligence of women to the fullest possible use.

My mother is also the starting point of my activities for peace. She remained brave and undaunted though four of her sons were taken away from her, one after another, to fight in World War II. But when, after the war, she received the news that her eldest son had been killed in the fighting, she was heartbroken. I will never forget the sight of her pain and sorrow at that moment as long as I live.

The sorrow of one good-hearted mother is the sorrow of millions of mothers. War, which forces the mothers of the world into submission and subjects them to starvation and such bitter grief, must never be permitted, no matter what the circumstances. War is the work of devils. A truly happy society is one in which such suffering of mothers has been entirely eliminated.

During the war, many of the trees of the neighborhood in Tokyo where I was born and raised were destroyed in the air raids. The few that were spared were cut down to provide fuel for military purposes. The large cherry tree in our yard also fell cruel victim to the ax, and a weapons factory was built on the site where it formerly stood.

Strangely, in one part of my neighborhood several cherry trees remained standing, amidst their desolate surroundings. After the war, the trees sent out buds and bloomed profusely again, as if to encourage the people passing under their branches. I recall my mother's expression of solace when she gazed up at their flowers.

And at that moment, I made a decision: in the future, I would plant cherry trees all over Japan. I have been true to this dream of my youth, planting commemorative trees in the fertile soils of countries around the globe, with the prayer for the growth and development of each nation and for the good health of my friends living there. 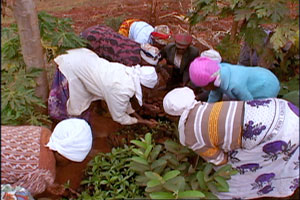 Women of the Green Belt Movement
(from the film, A Quiet Revolution)

Planting a tree is planting life; it is fostering the future, fostering peace--these are beliefs that Dr. Maathai and I found we shared at the deepest level when we met and talked.

I asked a group of young people to join me in welcoming Dr. Maathai, the mother of African environmentalism, just as I had when we welcomed South African President Nelson Mandela, the father of human rights in Africa (in October 1990). I did this out of my wish to communicate and pass on the thoughts and actions represented by both African leaders to future generations. I wished youth to engrave the prayers of those many nameless African mothers deep in their hearts.

Dr. Maathai said: "No matter how hopeless the situation seems, the light of hope can shine." What strength, what optimism! The hope she referred to is, no doubt, the young people of whom she has such high expectations.