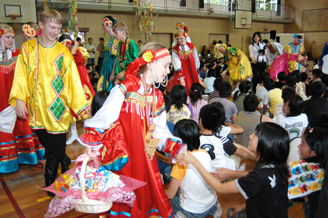 Members of a Russian folk ensemble on a Min-On-sponsored tour to Japan visit a school in Osaka.

"Music speaks directly to the heart. This response, this echo within the heart, is proof that human hearts can transcend the barriers of time and space and nationality. Exchanges in the field of culture can play an important role in enabling people to overcome mistrust and prejudice and build peace."1--Daisaku Ikeda 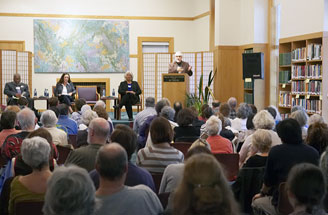 A symposium at the Ikeda Center for Peace, Learning, and Dialogue (formerly the Boston Research Center for the 21st Century)

Since becoming president of the Soka Gakkai in 1960, and later, the SGI in 1975, Daisaku Ikeda has established a number of institutions in different fields, furthering the vision of constructing the foundations for peace in the twenty-first century. The Toda Institute for Global Peace and Policy Research, for example, seeks to promote human security and global governance, bringing scholars and activists together to build a network for peace research and dialogue that encompasses the globe. The Institute of Oriental Philosophy promotes academic research into Asia's philosophical heritage, furthering international academic collaboration in this field. The Ikeda Center for Peace, Learning, and Dialogue (formerly the Boston Research Center), founded in 1993, has a focus on dialogue around human rights, nonviolence, environmental ethics, women's leadership and economic justice. 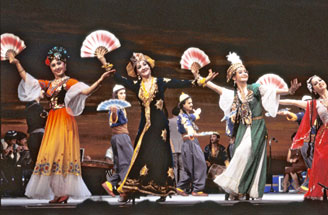 Artists from China, Uzbekistan, Turkey and Japan collaborated in 1985 in "A Musical Voyage along the Silk Road" tour of Japan organized by the Min-On Concert Association.

One particularly innovative approach to peace is the Min-On Concert Association, founded in 1964, which promotes peace through international exchanges of the performing arts. Min-On is a manifestation of Ikeda's belief in the power and importance of culture and the arts in fostering mutual understanding among peoples and societies. The premise is simple: that artistic expressions have the power to open people's hearts to one another and make evident our shared humanity.

Since the association's founding, hundreds of musicians and performing artists from some 100 countries have toured Japan, while dozens of Japanese artists have performed abroad. Min-On is now one of the largest and most active cultural associations of its kind in the world promoting international cultural exchange. As well as bringing artists to major metropolitan areas, Min-On also takes visiting cultural groups to schools and outlying areas.

A written response from one schoolgirl after a visit from the Ethiopian national dance troupe encapsulates Min-On's intention: "I admit that I knew next to nothing about Ethiopia until today. But from now on I'll be following the news closely to see what happens in that country. If it's good news, I'll be happy for them. But if it's not--if they suffer from famine or war, for example--then their pain will be my own."

And as Ikeda says, "If you have friends living in another country, you will be unlikely to support the idea of going to war with them. People-to-people ties can act as a brake at a time when political tensions build up."

Cultural exchange of this sort also counteracts cultural and national prejudices, creating the awareness that no one culture is superior or inferior to another.

The Tokyo Fuji Art Museum founded by Ikeda rests upon a similar vision of the power of art to promote peace.

Ikeda has founded various educational institutions with a focus on peace and the ideal of global citizenship. Likewise, education is an integral aspect of the SGI's peace movement that finds expression in the numerous initiatives for public education and awareness-raising through exhibitions and symposia. Through the SGI's grassroots network, exhibitions on topics such as disarmament, human rights and sustainable development have reached hundreds of thousands of people around the world, always with an emphasis on the significance of each person's role in tackling these daunting issues.

The theme running through all these efforts is that a single individual can make a difference and that the action taken, the path chosen, by each of us matters very much.