Following his forced resignation as president of the Soka Gakkai, Ikeda embarked on a series of trips abroad. As well as encouraging SGI members, these trips were aimed at expanding social and cultural relationships and promoting dialogue. As he describes,

"With the 1979 Soviet invasion of Afghanistan, the resulting boycott of the 1980 Moscow Olympics, and the Reagan Administration in the United States taking a more aggressive stance toward the Soviet Union, Cold War tensions were running high. That is precisely why I visited both the Soviet Union and the United States at that time--because I believed that even one dialogue, though its effect might be small, would lead to another and another in­ a cumulative, ripple effect. In a time of crisis, to merely sit by and complain is the mark of spiritual defeat."1 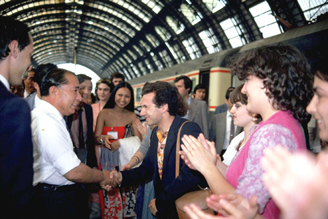 A broad view of Ikeda's activities during the 1980s thus sees him undertaking various efforts to deepen and expand relationships of dialogue with individuals in cultural and academic fields around the world. Ikeda made particular efforts to develop relations with Asian countries, many of which still held resentment toward Japan for the atrocities they had suffered from Japanese militarism during the war, a history many feel Japan is still unwilling to properly acknowledge. The 1980s were the era of Japan's "bubble economy." Its dramatic economic ascendance served in many ways to heighten Japan's sense of superiority toward other Asian nations, deepening such feelings of resentment. Ikeda's dialogues and writings squarely confronted the fact of Japanese wartime aggression and the atrocities committed by the Japanese military, and sought to build solidarity for the opposition of war and the creation of a lasting peace in the region. The list of Asian figures with whom Ikeda has met includes some 20 heads of state alone.

Ikeda also promoted cultural exchanges between Japan and its Asian neighbors. The Min-On Concert Association which he founded in 1963 brought cultural groups from throughout the region to Japan, introducing the cultural richness of those countries to Japanese audiences. The Tokyo Fuji Art Museum, established in 1983, pursues a similar mission of creating ties of peace through cultural exchange, sponsoring art exhibitions in Japan and abroad. 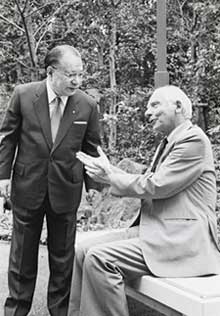 In 1983 Ikeda began writing peace proposals, which he has continued to publish annually on the January 26 anniversary of the SGI's founding. These proposals offer a perspective of issues facing humanity, suggesting solutions and responses grounded in Ikeda's Buddhist philosophy. They include specific agendas for strengthening the United Nations, including strengthening the capacity for civil society involvement, which Ikeda regards as essential to the establishment of peace in the world. Ikeda recalls the early roots of this support for the world body within the Buddhist movement:

"Mr. Toda, who called for a global citizenship and who keenly sensed the need for organizations that transcend the framework of the state, held profound expectations for the United Nations. 'The United Nations is the crystallization of the wisdom of the 20th century,' he would state emphatically. 'This stronghold of hope must be resolutely protected and cultivated toward the next century.' Mr. Toda had closely watched Japan as it withdrew from the League of Nations (in 1933) and proceeded toward war . . . As a Buddhist, and in keeping with my mentor's instructions, I have consistently taken action to promote the United Nations as a central governing body for the world.2"

Ikeda's support has been sustained and extensive. Much of it is effected through the activities of the Soka Gakkai and the Soka Gakkai International, both registered as NGOs with the United Nations. It includes collaboration on large-scale international public exhibitions on such issues as building a culture of peace, nuclear abolition, sustainable development, human rights, petition campaigns and fund-raising.

Ikeda has held dialogue with three of the organization's Secretaries-Generals and in 2006 submitted a proposal on UN reform. [Link]