“Bridges toward an indestructible peace for humankind can only be forged by fostering people and forging strong ties between them, their hearts and minds. And that process is, by its very nature, a gradual, grassroots effort.”1--Daisaku Ikeda

In June 1996 Ikeda traveled to Cuba and met with Cuban leader Fidel Castro, as well as a number of cultural and academic figures in the country.

Shortly before his visit to Cuba, Ikeda had traveled to the U.S. Relations between Cuba and the U.S. were then at a low point and the U.S. had increased economic sanctions against the island. There was considerable opposition to Ikeda's plans for visiting Cuba, but he was determined to go, seeing this also as an opportunity to help effect a change in the tense situation. One individual who was interested in and supportive of Ikeda's intentions was former U.S. Secretary of State, Henry Kissinger, whom Ikeda met while in the U.S. 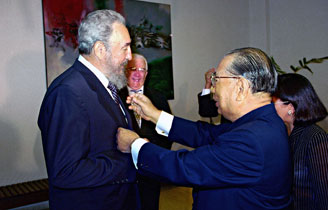 Despite considerable opposition, Ikeda traveled to Havana to meet with Fidel Castro in 1996.

Ikeda was greeted warmly in Cuba. During his visit, he was presented with the Order Felix Varela of the First Grade of the Republic of Cuba and an honorary degree from the University of Havana. President Castro, it was noted, dressed uncharacteristically in a suit, rather than his usual military fatigues, for his meeting with Ikeda. The two engaged in a lengthy conversation, though the content of their talks was never made public.

Ikeda's ability to act as a go-between in such situations is a result of the trust he painstakingly develops with those with whom he interacts. His efforts to promote culture and education are often at the base of these relationships of trust.

Ikeda's visit to Cuba had come about through the invitation of Cuban government officials out of appreciation for his efforts during the 1980s and 90s to develop cultural and educational exchanges between the two countries.

These efforts began in 1987 when the Min-On Concert Association, founded by Ikeda, invited Cuban musicians to perform in Japan. The success of these events opened the way to further Cuban musical and dance productions in Japan. 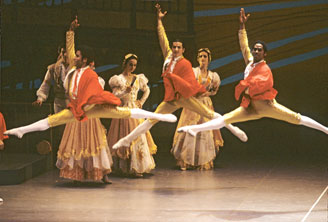 The National Ballet of Cuba performed in Japan in 1991 at the invitation of the Min-On Concert Association, founded by Ikeda.

Later, Cuba's then Ambassador to Japan Eduardo Delgado Bermudez was invited to talk at Soka University in Tokyo, and in 1995 a delegation of the Soka Gakkai's youth members visited Cuba. The following year an exchange agreement was signed between Soka University and the University of Havana.