Ikeda's trips abroad during the 1960s startled those around him to the realization that his vision for the dissemination of Nichiren Buddhism was not confined to Japan but was on a far grander scale than anyone imagined. His activities during the 1970s demonstrated that his vision of the role of Nichiren's Buddhism in society--its imperative for people's happiness--was not bound by a narrow sense of religiosity. More than simply a- religious doctrine, for Ikeda, Nichiren's Buddhism was the philosophical basis for an active engagement with the global and societal challenges of the modern world.

One of the hallmarks of Ikeda's peace philosophy is his commitment to dialogue. Ikeda constantly meets to talk and exchange views with representatives of cultural, political, educational and artistic fields from around the world. The number of formal encounters of this kind has been estimated at around 1,600. Many of these meetings have led to the publication of collaborative dialogues on a diverse range of topics--history, economics, peace studies, astronomy and medicine, to name a few. Some of the individuals with whom Ikeda has published dialogues include former Soviet president Mikhail Gorbachev, Nobel Peace Prize-winning scientists and peace activists Linus Pauling and Joseph Rotblat, futurist Hazel Henderson and Chinese literary giant Jin Yong. The first notable dialogue of this kind was with the Austrian thinker Count Richard Coudenhove-Kalergi, in 1967, later published in Japanese under the title Civilization, East and West. [See list of published dialogues.]

The encounter that is regarded in many ways as the gateway at the beginning of the broad path of dialogue that Ikeda has constructed is his dialogue with Arnold Toynbee. 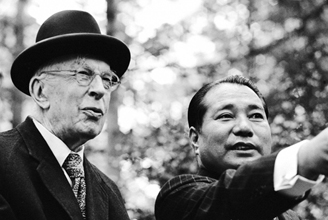 British historian Arnold Toynbee and Ikeda began their dialogue in London in 1972.

In September 1969, Ikeda received a letter from the 80-year-old British historian, inviting him to London for a discussion. Toynbee was famous for his epic study of world history analyzing the rise and fall of civilizations, and a well-known figure in Japan. In 1972 and 1973 Ikeda traveled to London and met with him. Their dialogue took place over a total of ten days, the two men examining and discussing various problems of contemporary society.

Toynbee, whose central historical thesis places great importance on the role of religion in the development of civilizations, saw Buddhism as a religion most appropriate to our current, rational-scientific age, a philosophy that might offer solutions to the crisis confronting the world. This was the root of his interest in Ikeda. Their dialogue, which was published in 1975 as Choose Life, has since been published in 28 languages.

At the end of their discussions, Toynbee gave Ikeda a list of prominent Western thinkers with whom he suggested Ikeda meet. Toynbee apparently had great expectations of Ikeda and remarked that he would likely receive more honorary doctorates within his lifetime than the historian had done. In fact, Ikeda received his first honorary doctorate shortly after that, from Moscow State University in May 1975. To date he has received over 370.

As well as his discussions with scholars and cultural figures, Ikeda also began to engage in dialogue with political figures during the 1970s. This was a time of deep tensions between the superpowers, with the threat of nuclear annihilation hanging over humanity. Ikeda describes his wish to do whatever he could to contribute to an easing of the tensions.

During 1974 and 1975 he visited China, the U.S.S.R. and the U.S., meeting with Soviet Premier Aleksey Kosygin, Chinese Premier Zhou Enlai and U.S. Secretary of State Henry Kissinger in turn.

The following passage in Ikeda's own words outlines these initiatives:

"During 1974 and 1975, I visited China, the Soviet Union, and the U.S. in my capacity as a private citizen, in the hope of contributing to defusing the tensions among them. At the time there was a real danger the world would split irrevocably into three hostile blocs as relations between the U.S. and the U.S.S.R. continued to deteriorate while the Sino-Soviet confrontation escalated.

"On my first visit to China in May 1974, I witnessed the people of Beijing building a vast network of underground shelters against the intensely felt threat of Soviet attack. In September the same year, I visited the Soviet Union for the first time, and met with Premier Aleksey N. Kosygin (1904-80). I spoke of China's deep concern about the Soviet Union's intentions, and asked him straight out whether the Soviet Union was planning to attack China or not. The premier responded that the Soviet Union had no intention of either attacking or isolating China.

"I brought this message with me when I next visited China in December of that year. It was also on this visit that I met with Premier Zhou Enlai (1898-1976), and discussed with him the importance of China and Japan working together for global peace and prosperity.

"During our meeting, Premier Zhou stressed that China had no wish to be a superpower. Taken together with Premier Kosygin's words, this statement convinced me that an easing of tensions between the two countries was not far off. And indeed, this proved to be the case.

"In January of 1975, I visited the United States and exchanged views with Secretary of State Henry Kissinger. When I told him of Premier Zhou's wish to conclude a Sino-Japanese peace and friendship treaty, Kissinger expressed his agreement and support for the idea.

"I met with the Japanese Minister of Finance, Masayoshi Ohira (1910-80), on the same day in Washington. I conveyed Kissinger's words to him and expressed my own sense of the absolute necessity of such a treaty. Ohira, who later served as Japan's prime minister, responded that he was fully committed to bringing such a treaty about. Three years later, in August 1978, the Sino-Japanese Peace and Friendship Treaty was officially concluded."1

[Further details of Ikeda's efforts to develop dialogue with the Soviet world and to restore Sino-Japanese relations can be found in the "Sino-Japanese Relations" chapter in the Peacebuilder section of this site.]

These efforts marked the beginning of a vigorous engagement with cultural, political and academic figures from around the world, which Ikeda continues to develop to this day. They have resulted in over 80 collaborative books on a wide variety of issues, from peace building to art and cosmology. The quickest gauge of the extent and breadth of Ikeda's efforts may be the over 350 honorary academic awards and more than 20 national orders he has received. 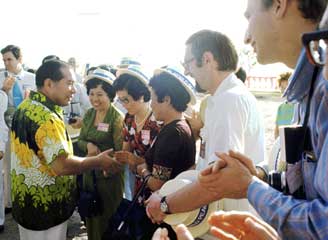 Ikeda greeting participants at the SGI launch in Guam, 1975

In the midst of these efforts, Ikeda was making arrangements for the establishment of the Soka Gakkai International (SGI). On January 26, 1975, Soka Gakkai representatives from 51 countries and territories gathered on the island of Guam for the "First World Peace Conference" that inaugurated the international association, with Ikeda as its founding president. Describing his motivations for establishing the SGI, Ikeda writes, "Everything depends on the people. That is why it is vital to forge a growing network that brings people of goodwill and conscience together.2

Today there are SGI members in over 190 countries and territories around the world, making SGI possibly the world's largest and most diverse Buddhist movement whose members embrace a philosophy of active social contribution. This is put into action through a variety of locally based initiatives in areas such as sustainable development, intercultural and interfaith dialogue, nonviolence, human rights education and nuclear abolition.