Daisaku Ikeda was born in Tokyo in 1928 as the fifth of eight children in a family that harvested edible seaweed for a livelihood. 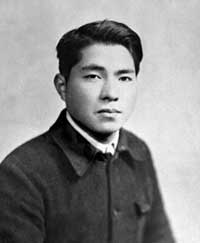 Throughout his youth, Ikeda suffered from a weak constitution, compounded by tuberculosis. His doctor's prediction that he would probably not live beyond thirty imparted to him a spirit of intensity, the determination not to waste a moment of life, which has become a defining aspect of his character.

Ikeda grew up in Tokyo in an age when Japan, which had already annexed Korea and Taiwan, and the country's militarist regime was driving the nation inexorably toward World War II. Nearly every facet of Japanese life--from families and factories to schools and religious groups--was marshaled for the war effort. Dissent had been ruthlessly suppressed.

This was the seeding ground of Ikeda's passion for peace. Even today his recollections of that period seethe with anger at the foolishness and arrogance of militarism. Ikeda was a young teenager in 1940s when Japan entered World War II. His family, like most other Japanese families, was devastated, spiritually and materially. Their home was twice destroyed in air raids and at one point he and his parents lived in a makeshift shelter constructed over a bomb crater. 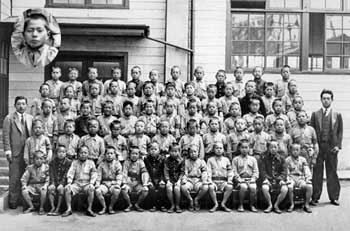 Ikeda's four older brothers were drafted. He has frequently recalled the memory of the eldest brother, Kiichi, home on temporary leave, describing with disgust the Japanese military's treatment of the Chinese people. When the war had ended, after a long, anxious wait for news of his brother, he remembers too watching his mother silently receive the small white box containing Kiichi's cremated remains. "I developed" he writes, "a deep hatred for war, its cruelty, stupidity and waste." 1

Rather than relief, the war's end brought to many of Ikeda's generation only a deeper sense of spiritual anguish and confusion. He writes:

"I was 17 when World War II ended. There was among young people a tormented sense of spiritual void. It wasn't just the physical landscape that had been reduced to ashes. The bizarre system of values drilled into us in the wartime years had been exposed as fraudulent and razed to the ground . . . I found it impossible to trust the intellectuals and politicians who, having sung the praises of war and driven large numbers of young people to their deaths, overnight became apostles of peace and democracy."2 [Read full text]