A Question of Motivation 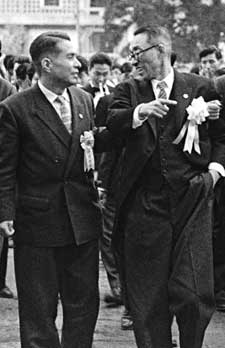 This biographical sketch has outlined in fairly broad strokes the course of Ikeda's life. Other sections on this site look in more detail at his engagement and achievements in the fields of education, culture, peace, philosophy and literature.

Looking at his diverse endeavors, one might well wonder what has motivated Ikeda to pour such intense energy into such a broad range of pursuits. His achievements in any one field represent monumental, lifetime undertakings: his development of what is possibly the world's largest and most diverse Buddhist movement and his position as spiritual mentor to some 12 million people around the world; his extraordinarily prolific authorship (currently, over one hundred volumes of his compiled collected works); his dialogic and diplomatic efforts across the globe; his founding of peace and cultural institutions, each making significant contributions at a global level; his establishment of two universities and a thriving school system. Although there is naturally interrelation between these different elements, taken together they represent startling diversity.

The motivation Ikeda most frequently describes is revealing. All of his accomplishments, he has said, have been an effort to fulfill the vision of his mentor, Josei Toda--to demonstrate Toda's greatness. Everything Ikeda says and does is with reference to Toda. "I have no life apart from working, advancing and living with all my might alongside President Toda. I have come to realize that I am who I am because of my mentor."1 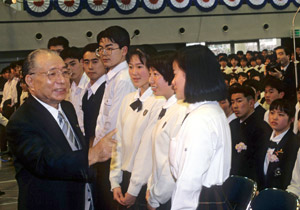 Ikeda's statement points also to another, more forward-looking dimension to his motivations. That is, to make his own life and vision a source of inspiration to young people. For as much and as often as Ikeda talks about his efforts to respond to the vision of his own mentor, he exhorts younger people to construct upon foundations that he has laid. His efforts, in this sense, he says, have been to create opportunities in different arenas for youth to pursue, in their own ways, the vision of a peaceful, flourishing human society: to open up paths which others can follow.