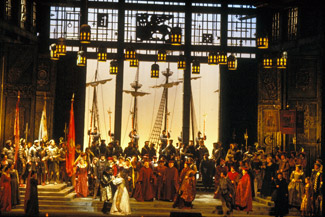 Milan's Teatro alla Scala performing Otello in 1981 at the invitation of the Min-On Concert Association. This was its first Japan tour.

"What will serve as a fundamental force for taking humanity from this twentieth century of war and ushering in a twenty-first century of peace? This is a question of gravest consequence for humankind. The answer is the power of culture--that force which links human hearts together across differences of race, nationality and religion. This unifying power of culture represents a brilliant light of hope for all six billion members of the human family."1--Daisaku Ikeda 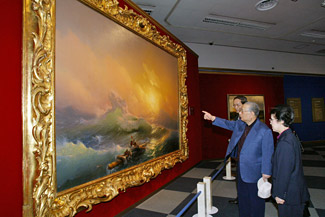 In 1963, three years after becoming the third president of the Soka Gakkai, Daisaku Ikeda established the Min-On Concert Association. In 1973 he founded the Fuji Art Museum.

Min-On is an abbreviation of Minshu Ongaku Kyokai--literally, the People's Concert Association. In founding both Min-On and the Fuji Art Museum, Ikeda describes his motivation as a wish to restore art and culture to the people.

He remarks that museums first came into being in the West as a by-product of the struggle for democracy. Art had been the preserve of a select few and was now made available to all. Ikeda's wish was to make top quality art available to a broad audience. He notes that at the time of founding these institutions popular engagement with the arts was not strongly encouraged in Japan. "This was in part because the Japanese people were not all that interested in the arts. Also, those in the arts did not make sufficient efforts to reach out and bring their art to the people."2

"Without the participation and appreciation of the people, culture and art are empty, meaningless,"3 he says. Asked once about what the characteristics of a truly peaceful society might be, he remarked that it would be the kind of society where one could hear ordinary people freely discussing great works of art in their daily conversations. Peace, in other words, is inseparable from the widespread enrichment of people's lives, which is the function of the arts.

Min-On is today Japan's largest private cultural institution. It has conducted exchanges with more than 100 countries and territories, bringing to Japanese audiences performances ranging from a wide variety of ethnic music and dance ensembles, to popular artists, to La Scala, the 350-member Vienna State Opera and the Hamburg Ballet. The concert association takes performers not only to Japan's major cities but also regional cities in line with its aims of wide accessibility of the arts. Some 1.2 million Japanese schoolchildren have had the opportunity to experience free performances by the artists Min-On has invited. Min-On also sponsors local and international music competitions, encouraging the development of new talent.

As well as enrichment through the arts, a key aim the concert association is to foster mutual understanding and break down prejudices through cultural exchange, as a basis for peace.

A written response from one schoolgirl after a visit from the Ethiopian National Folk Music and Dance Troupe encapsulates Min-On's intention: "I admit that I knew next to nothing about Ethiopia until today. But from now on I'll be following the news closely to see what happens in that country. If it's good news, I'll be happy for them. But if it's not--if they suffer from famine or war, for example--then their pain will be my own."4

And as Ikeda says, "If you have friends living in another country, you will be unlikely to support the idea of going to war with them. People-to-people ties can act as a brake at a time when political tensions build up."5

1 Ikeda, Daisaku. 1999. "Shushin meiyo kaiin shogo juyoshiki kara Ikeda SGI kaicho no shaji ["Ushering In a Culture of Peace in the Twenty-first Century," on the conferral of Honorary Life Membership by the Photographic Society of Singapore]." Seikyo Shimbun, October 25, p. 2.