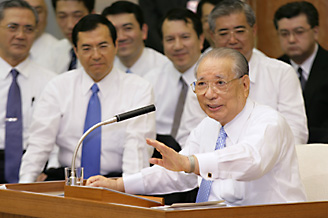 The significance of Daisaku Ikeda's contributions as a Buddhist philosopher can most readily be gauged in the dramatic growth of the Soka Gakkai International (SGI) organization that he leads, and in the broad diversity that characterizes the movement. The SGI is perhaps the largest, fastest-growing and most diverse association of lay Buddhists in the world today.

Indeed, Buddhism came into being some 2,500 years ago as a teaching to liberate people from life's inevitable sufferings. Despite its universal concerns and long history, for the most part Buddhism has remained, in Western perception, an Asian religion tightly bound up in Asian culture. Ikeda has been noted for his success in recasting and expanding the cultural context in which Buddhism functions as a living faith. Certainly, among members of the SGI, Buddhism is practiced and applied today in a wide variety of cultural settings by people from all walks of life. 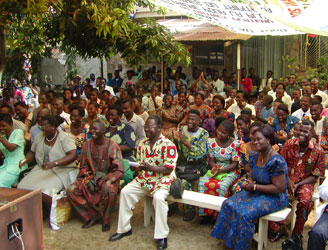 An SGI meeting in Togo

Ikeda's philosophy is inseparable from the teachings of the thirteenth-century Buddhist sage Nichiren (1222-82) and the Lotus Sutra from which Nichiren's teachings are derived. His achievement has been his ability to understand and express the essence of these teachings as a philosophy of human development and social engagement in a way that offers a vigorous response to the challenges of contemporary society. There are three prominent characteristics of this philosophy: an approach that has been called Buddhist Humanism; a belief in the importance of dialogue; and a commitment to personal transformation as the driving force for social change, referred to as "human revolution." It finds expression not simply as a set of ideas but as a basis for actively engaging with life and social realities. The basic core of this philosophy is the utmost value it places on each individual life.

More than anywhere, Ikeda's philosophy has been embodied in his own actions: As an impassioned advocate of dialogue for peace, Ikeda has engaged in dialogue with an astonishingly wide range of thinkers. He has sought to build bridges of understanding among people of different nations and cultures, from diverse philosophical and faith traditions. These efforts are deeply rooted in the Buddhist belief that the most valuable way of life is one committed to the alleviation of human suffering.

Ikeda has published an extensive body of works exploring his ideas on various subjects. Many of these are dialogues with experts in particular fields. They all, however, are driven by an urgent desire to find creative paths forward out of the quandaries in which humankind is enmeshed. Information on those available works that have been translated into English can be found in the Books section of this site.