Trip to the USA 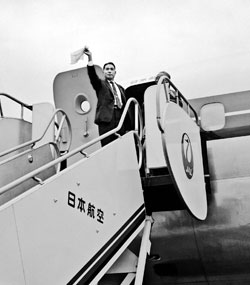 Departing for North and South America in October 1962 (Haneda, Japan)

One of Ikeda's first initiatives after assuming presidency was to plan a trip to the USA in order to encourage the handful of Soka Gakkai members that lived there, mostly war brides who had emigrated with their American husbands.

Ikeda's plan was met with incredulity by the Soka Gakkai leaders. The organization in Japan was to all intents and purposes new--having burgeoned from a few thousand to almost a million members in the space of a few recent years--and tremendous effort and attention would be needed to secure its organizational structure. The global spread of Nichiren Buddhism was not a prospect that even the senior leaders of the Soka Gakkai had yet begun to contemplate.

Nevertheless, in October 1960, five months after his inauguration, Ikeda departed for the United States, and during the same trip visited Canada and Brazil.

The disjuncture between the vision of the young Ikeda and that of the other leaders of the Soka Gakkai at that time is now marveled at by those same leaders. The Soka Gakkai International today comprises some 12 million members in almost every country of the world--perhaps the largest and most diverse international lay Buddhist organization. The image of Ikeda boarding the airplane before his departure for the U.S. has thus come to symbolize, in some sense, what may ultimately be Ikeda's most remarkable and enduring quality: the scope and grandeur of his vision and his daringness to strive toward it.

Ikeda's first port of call was Hawaii, where some dozen or so Soka Gakkai members lived. Two days later Ikeda and the four Japanese Soka Gakkai leaders accompanying him departed for San Francisco and from there to Seattle. 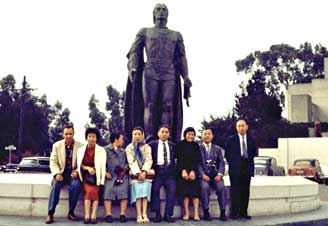 Ikeda (center) and Soka Gakkai members before the Statue of Columbus at Coit Tower in San Francisco, California, in October 1960

The number of Soka Gakkai members in the U.S. was still very small, but Ikeda's ability to inspire the individuals he met proved a powerful impetus to the expansion of the Buddhist movement there. He established an organizational structure to encourage and facilitate more frequent interaction between the members and appointed people into positions of responsibility.

Many of the Japanese women Ikeda met there were deeply unhappy in their adopted country and pining for the life they had left in Japan. Ikeda's encouragement to them to obtain American citizenship, learn to drive and improve their English abilities provided them with a set of clear, concrete challenges that enabled them to gradually transform their experience.

In New York, Ikeda and his party visited the headquarters of the United Nations and observed a session of the General Assembly. Here, Ikeda recalls, he began to ponder the role and potential of the international body in creating peace in the world. This question would later become a sustained focus of his attention--an issue he continues to explore through proposals, dialogues and various collaborative efforts and other types of engagement between the SGI and the UN.

Ikeda also recalls the impression of the vibrancy of the delegates from a number of newly independent African states. He remarked at the time, as he would again later, that he believed Africa would be "the continent of the twenty-first century." This too marked the beginning of an ongoing engagement with the continent, evidenced in a number of his writings, in efforts to promote cultural and educational exchanges and in his meetings and dialogues with African leaders.