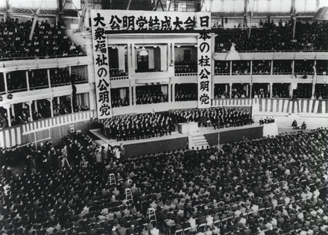 The inaugural meeting of the Komei Party. Ikeda's decision to establish a political party was controversial, but based on Buddhist ideals.

It was in these early years of Ikeda's presidency that he made what has perhaps been his most controversial decision: the establishment of the Komei ("clean government") political party in 1964. The formation of a political party would give the Soka Gakkai's hitherto independent candidates greater influence within the Japanese party political structure to fulfill their mandate. The emergence of a party in Japan based on the humanistic and pacifist principles of Buddhism, a party guided by the principle of respect for the dignity of life, was necessary, Ikeda believed, to reform Japanese politics--to focus it more squarely on the welfare of the people--and bring about lasting improvements in the lives of ordinary citizens. The essential vision of the Komei party's founding, in short, was government underlain by the Buddhist principles of compassion and respect for life.

There was also a specific need for broader political representation. As he explains:

"There had been no real political party working for the interests of ordinary people in Japan. The ruling conservative party was aligned with industry and big business, and the progressive parties found their base in the organized labor that worked for big business. But the Japanese populace was diversifying, and the largest number of people, who most needed the attention and support of the government, belonged to unorganized labor--a group that was neglected by the progressives and conservatives alike. The creation of a new party, whose base comprised not only organized labor but people working and living in all variety of circumstances, was crucial to returning government to the hands of the people."1

The political establishment, moreover, reflected the Cold War divisions, and "existing parties were either pro-American or pro-Soviet, and had little independence as political institutions. The people were no doubt eager for a political party that was not controlled by ideology or the interests of foreign powers but made the happiness and peace of the people its first priority and led the government from a moderate position."2

Elaborating further on the necessity of a Japanese party free of Cold War ideology, Ikeda writes,

"President Toda also believed that, amid the Cold War's intensifying threat of nuclear weapons, it was the responsibility of Japan, as the only nation that had been the victim of a nuclear attack, to speak out against that threat and become a messenger of world peace. In order for Japan to rise to that role, he strongly felt that political leaders with a global consciousness--an awareness that we are all members of the same global community, which he called 'global citizenship'--were indispensable. But the East-West rivalries of the Cold War were in fact brought into the Japanese political arena just as they were."3

The party adopted a strong social welfare stance, with the aim of bringing "the Buddhist spirit of compassion to the realm of government."4 As the party's name implied, one of its primary focuses was also to challenge the corruption endemic to social and political structure of Japan. The political establishment at the time was essentially the same as it had been before and during the war, transformed only by the facade of democratization imposed by the Allied powers.

Though based on Buddhist principles of compassion and the sanctity of life and supported by the Soka Gakkai membership, Komeito was to be structurally and organizationally separate from and independent of the religious organization.

Ikeda writes, "We founded the Komei Party with the aim of realizing a government with the Buddhist principles of compassion and respect for life as its basis. This is different, however, from direct religious involvement in government. The Komei Party is a political party that seeks to contribute to the well-being of the Japanese people as a whole, and a distinct line has been drawn between its operation and that of the Soka Gakkai . . . Religion cultivates the soil of the human spirit. The rich vegetation that sprouts, blooms, and bears fruit on that vast earth is culture in the broadest sense, and it includes government. We have tilled the spiritual soil and planted the seed for a tree, in other words, a political party. We intend to continue supporting it wholeheartedly in the future, but how it grows and the kind of fruit that it produces is ultimately up to the tree, the party, itself."5

Komei representatives would not be able to concurrently hold leadership positions in the Soka Gakkai; the organization's members were free to support any political party or candidate of their choice; and Komei was to recruit party members both from within and without the Soka Gakkai.

In addition, while Ikeda founded the party, he has from the very beginning disavowed any intention of entering politics himself and expressly removed himself from ever heading the Komei. He made only one policy proposal "that the Komei Party build into its foreign policy the formal recognition of the People's Republic of China and the party's intention that Japan work to normalize diplomatic relations between the two nations."6

Ikeda was under no illusions, however, and knew that the growing influence of the Komei party would threaten the political establishment and make both him and the Soka Gakkai targets of criticism and attack.

During a trip to Brazil in 1966, Ikeda responded to a journalist's question about his intentions of establishing political parties in other countries:

"How Soka Gakkai members handle political issues in their respective countries is something they must discuss and decide amongst themselves. This is not something that I, as a Japanese citizen, could decide or mandate, and in fact I believe it would be wrong for me to do so. With that said, however, I personally don't think there is any need whatsoever for the Soka Gakkai to establish political parties in Brazil or any other country."7

The relationship between the Soka Gakkai and the Komei party in Japan today is one of an independent political party and its support-base.