As well as the founding of the Komei political party, the 1960s saw Ikeda begin three major undertakings that have proved definitive for him: his novel The Human Revolution, his efforts to strengthen Sino-Japanese relationships and his establishment of the Soka School system. 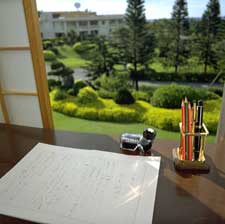 In December 1964 Ikeda began writing his serialized novel, The Human Revolution, which details the struggles of his mentor, Josei Toda, to reconstruct the Soka Gakkai after his release from prison at the end of World War II. It opens with a concise, scathing condemnation of war and militarism that offers a clear context for the movement's objectives, "Nothing is more barbarous than war. Nothing is more cruel . . . Nothing is more pitiful than a nation being swept along by fools."1

The series ran to twelve published volumes in the English translation. This and its ongoing sequel, The New Human Revolution, have been a major undertaking of energy and commitment for Ikeda.

The sequel, which Ikeda began writing in 1993, begins with the protagonist, representing Ikeda, setting off on his first trip to the USA. The initial chapters provide an intimate perspective on that history, describing Ikeda's encounters with the Japanese emigrants and his thoughts and plans for the future development of the movement there.

The rest of the series, now 30 volumes, is likewise an essentially grassroots history of the development of the Buddhist movement in Japan and around the world: a rich tapestry of narrative that encompasses Ikeda's multifaceted activities, his vision and ideals, discussions on history and philosophy, and descriptions of the life dramas of pioneer members and "ordinary" individuals of the organization. The recounting is finessed and dramatized in such a way as to produce an engaging story that is also essentially a textbook of Soka Gakkai Buddhist practice in the modern world and treatise on Ikeda's philosophy of leadership. 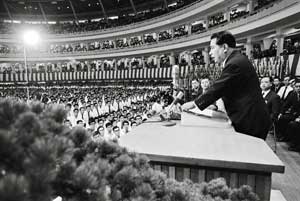 On September 8, 1968, during an address to over 10,000 members of the Soka Gakkai's student division, Ikeda called for the normalization of Sino-Japanese diplomatic relations and outlined steps toward achieving this. At the time, China was still perceived as an enemy nation by many within Japan and was also becoming increasingly isolated within the international community. Ikeda's proposal drew condemnation, but it also caught the attention of those, both in China and in Japan, who were interested in restoring relations between the two countries, including Chinese Premier Zhou Enlai. One individual who supported the normalization of relations between the two countries was Kenzo Matsumura, a member of the House of Representatives, the Lower House of Japan's Diet. He approached Ikeda following his speech and urged him to visit China. Ikeda felt this was a matter in which politicians should take the lead and suggested that the visit should be made by representatives of the Komeito political party. Thus a chain of events was set in motion, culminating in the restoration of diplomatic ties between the two countries in 1972.

Ikeda's initiative was inspired, he has said, by his mentor, Josei Toda, who had often spoken of the importance of Sino-Japanese friendship to world peace. Ikeda has also frequently described his desire to help repay the moral and cultural debt that Japan owes to China, especially after Japan's war of aggression against China during the 1930s and 40s. His efforts in this regard since the 1960s display a broad range of engagement that includes personal visits to the country; meetings and dialogues with political and cultural figures; ongoing educational exchanges; cultural exchange programs between citizens of the two countries; and artistic exchanges.

It was in the 1960s that Ikeda began also to work toward the founding of a school system based on first Soka Gakkai President Makiguchi's educational theories. This was a dream that both Makiguchi and Toda had cherished. In 1968, Ikeda realized the vision with the founding of Tokyo Junior and Senior High Schools. The schools were not simply a monument to his predecessors. Their establishment was the first major step in an ongoing endeavor to develop a humanistic educational system, one that Ikeda has described as the culminating undertaking of his life.

The schools' establishment was followed in 1971 by the establishment of Soka University, and in subsequent years by a string of other educational institutions around Japan and abroad. These schools are open to all students and have no religious instruction. Ikeda writes: "My determination was to build these schools up into centers of learning consecrated to the goal of peace, working with educators throughout the world."2

Many of the notable international figures who visit Ikeda take time to tour the Soka Schools. It is frequently remarked by these visitors that, in effect, the vibrancy and character of the students and staff, the focus on peace that is interwoven into all aspects of the curriculum and the general atmosphere of care and concern that pervade the schools represent perhaps the clearest and most impressive manifestation of Ikeda's values and vision.