Daisaku Ikeda is a peacebuilder, Buddhist philosopher, educator, author and poet. He was president of the Soka Gakkai lay Buddhist organization in Japan from 1960–79 and is the founding president of the Soka Gakkai International (SGI), one of the world's largest and most diverse community-based Buddhist associations, promoting a philosophy of empowerment and social engagement for peace. He is also the founder of the Soka Schools system and several international institutions promoting peace, culture and education. 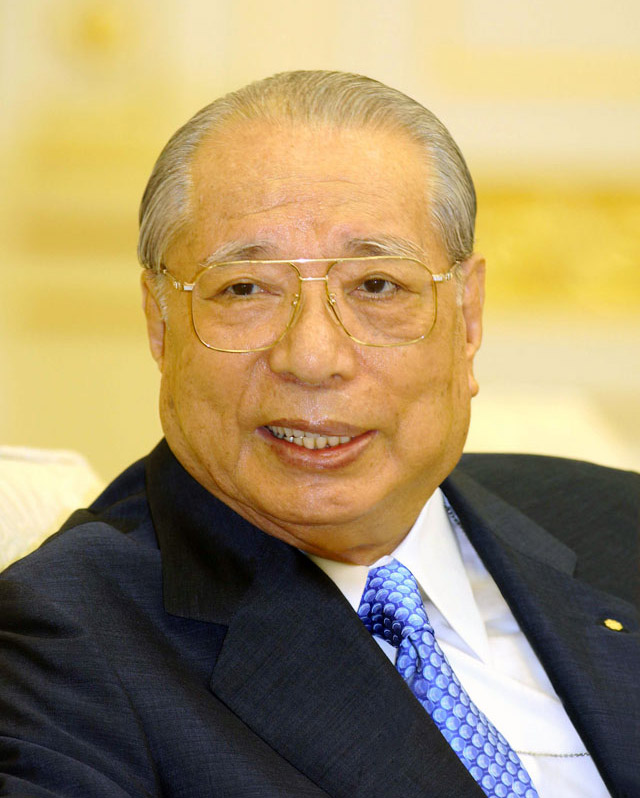 Daisaku Ikeda heads Soka Gakkai International, one of the world's largest and most diverse Buddhist movements.

Ikeda was born in Tokyo, Japan, on January 2, 1928, the fifth of eight children, to a family of seaweed farmers. Growing up during World War II, he endured firsthand the suffering and devastation of war, including the death of his eldest brother who was killed in action in Burma (present-day Myanmar). This experience as a teenager gave birth to a lifelong passion to work for peace and root out the fundamental causes of human conflict.

In 1947, at the age of 19, he encountered Buddhism through a meeting with Josei Toda (1900–58), educator, pacifist and leader of the Soka Gakkai. Toda had been imprisoned during the war together with his mentor Tsunesaburo Makiguchi (1871–1944). Both had held firm to their religious convictions in the face of oppression by the military authorities who imposed State Shinto ideology on the population as a means of sanctifying their war of aggression, and Makiguchi had died in prison. Toda's resolve to stand up to the militarist regime impressed Ikeda, who would later write, "The words of a person who had suffered imprisonment for his convictions carried a special weight. I felt intuitively that I could trust him." 1

Toda was engaged in the process of rebuilding the Soka Gakkai, which he had founded together with his mentor and fellow educator Makiguchi and which had been all but destroyed as a result of wartime persecution. Ikeda shared Toda's conviction that the philosophy of Nichiren Buddhism, with its focus on the limitless potential of the individual human being, could help revive society in the devastation of post-war Japan. The key is a process of inner-directed personal transformation known as human revolution that allows each individual to take responsibility for their own life and achieve happiness, while positively influencing their immediate environment and community.

Although Ikeda's association with Toda lasted only 10 years, he describes his mentorship by Toda as the defining experience of his life and the source of everything he has done and become.

In May 1960, two years after Toda's death, Ikeda, then 32, succeeded him as president of the Soka Gakkai. In 1975, he became the founding president of the SGI, now a global network linking over 12 million members in some 190 countries and territories. Ikeda writes, "Everything depends on the people. That is why it is vital to forge a growing network that brings people of goodwill and conscience together." 2 Under his leadership the movement began an era of innovation and expansion, becoming actively engaged in initiatives promoting peace, culture, human rights, sustainability and education worldwide.

To put into practice the educational philosophy of his predecessors Makiguchi and Toda, Ikeda established the Soka (value-creation) Schools system. This is a nondenominational school system based on an ideal of fostering each student's unique creative potential and cultivating an ethos of peace, social contribution and global citizenship.

Ikeda has also founded a number of independent, nonprofit research institutes that promote peace through cross-cultural, interdisciplinary collaboration: the Boston Research Center for the 21st Century (renamed Ikeda Center for Peace, Learning, and Dialogue in 2009), the Toda Institute for Global Peace and Policy Research (renamed Toda Peace Institute in 2017) and the Institute of Oriental Philosophy. The Min-On Concert Association and the Tokyo Fuji Art Museum promote mutual understanding and friendship between different cultures through the arts.

Ikeda is a strong proponent of dialogue as the foundation of peace. Since the 1970s he has pursued dialogue with individuals from diverse backgrounds—prominent figures from around the world in the humanities, politics, faith traditions, culture, education and various academic fields—in order to discover common ground and identify ways of tackling the complex problems facing humanity. Over 80 of these have been published in book form. Dialogue and the promotion of cultural exchange have also been at the basis of his efforts to build trust and foster friendship in contexts of historical division and conflict.

The central tenet of Ikeda's thought, grounded in Buddhist humanism, is the fundamental dignity of life, a value he sees as the key to lasting peace and human happiness. In his view, global peace relies ultimately on a self-directed transformation within the life of the individual, rather than on societal or structural reforms alone.

Ikeda is a prolific writer who has published more than 250 translated works, ranging from commentaries on Buddhism to biographical essays, poetry and children's stories.

He has two sons, Hiromasa and Takahiro, and lives with his wife, Kaneko, in Tokyo.


[The texts in the Profile section were developed by Anthony George, editor for the SGI Quarterly].