"In the end, peace will not be realized by politicians signing treaties. True and lasting peace will only be realized by forging life-to-life bonds of trust and friendship among the world's people. Human solidarity is built by opening our hearts to each other. This is the power of dialogue."1--Daisaku Ikeda 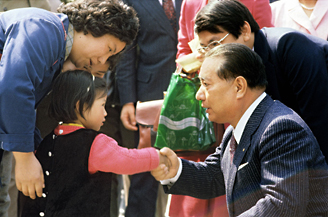 In the nearly 50 years since becoming president of the Soka Gakkai lay Buddhist association at the age of 32, Daisaku Ikeda has pursued a diverse range of activities in the pursuit of global peace. His energetic efforts include personal diplomacy during the Cold War, ongoing dialogues with a broad range of individuals from around the world, numerous publications and proposals and the founding of various peace-related institutions. He has also been a continuing source of inspiration for the SGI's global grassroots activities in such areas as human rights protection, nuclear abolition, disarmament, sustainable development and cultural exchange.

Ikeda's commitment to peace grows from his experience as a young teenager of World War II. His interactions with second Soka Gakkai president Josei Toda in the aftermath of the war helped shape Ikeda's antiwar sentiments into a philosophy that supports a multifaceted peace movement. What sustains Ikeda's energetic engagement is his Buddhist belief in the sanctity of life and the creative potential of individual human beings, and his faith in the power of dialogue to bridge the distances between people.

For Ikeda, peace is far more than the mere absence of war. Rather, it points to a set of conditions in which cultural differences are embraced and appreciated and in which dialogue is firmly established as the means of choice for resolving conflict. In recent years, the idea of a "culture of peace" has gained widespread currency in the world. From his writings and actions it is clear that Ikeda has been a pioneering practitioner of this concept.