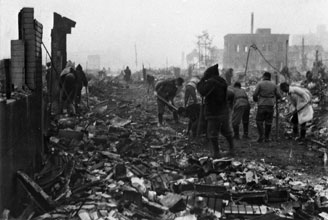 Ikeda's commitment to peace was forged by his boyhood experience of the tragedy and horror of war, growing up in militarist Japan during World War II. He has written frequently of the searing impact of that experience: seeing neighbors die in air raids and fire bombings, hearing from his enlisted brother of the cruelty of the Japanese army toward Chinese civilians, experiencing the loss of his brother and seeing his mother struggle under the weight of that grief. He has written, too, of his deep anger toward the political leaders whose callous arrogance brought about this suffering.

"Many of the young men of my generation were incited by the military government to go proudly to the battlefront and give their lives there," he writes. "The families left behind were praised for their sacrifice as 'military mothers'--a term deemed to carry high honor. But in reality what a devastating tumult of pain, grief and misery swirled in the depths of their hearts! A mother's love, a mother's wisdom, is too great to be fooled by such empty phrases as 'for the sake of the nation.'" 2 [Read full text] 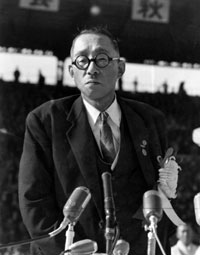 Soon after the war's end, Ikeda met Josei Toda (1900-58), the second president of the Soka Gakkai and the man whom he would come to regard as his mentor in life. One of the facts about Toda that immediately impressed him was that Toda had been imprisoned during World War II for his opposition to Japan's militarist government. Ikeda writes about how he had become disillusioned and disgusted with Japanese leaders and opinion makers who, overnight, had changed from enthusiastic proponents of the militarist cause into champions of democracy. Here, at last, was someone he could trust.

Toda had been imprisoned together with his own mentor, Soka Gakkai founding president Tsunesaburo Makiguchi (1871-1944). Makiguchi died in prison in 1944, and the experience profoundly affected Toda, igniting within him a powerful rage against war and militarism. He was convinced that the only thing that could prevent a resurgence of militarism would be for ordinary people to become stronger and wiser within the realities of their daily lives. Ultimately, he felt this required a spiritual movement among people that could transform the negative impulses of mistrust and violence within human beings themselves.

Ikeda grasped Toda's vision and committed himself completely to its realization. 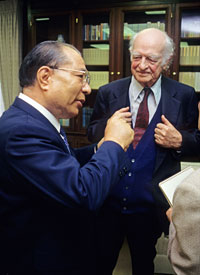 On September 8, 1957, at a large gathering of 50,000 Soka Gakkai's youth members, Toda delivered a forceful speech condemning nuclear weapons and anyone who would threaten "humanity's collective right to life" with their use. Calling nuclear weapons a manifestation of the darkest, most demonic aspect of the human spirit, he declared that it was the mission of the Soka Gakkai youth to work for their abolition.

This call became the foundation for the SGI's global peace movement, in which nuclear weapons abolition remains a prime focus. Over the decades Ikeda has put forth a number of proposals for steps toward a nuclear-free world and has collaborated with like-minded individuals and organizations toward this goal. In 1998, the SGI collected 13 million signatures on the global "Abolition 2000" petition submitted to the UN. It has also organized large-scale antinuclear exhibitions that have toured internationally. Ikeda has published dialogues with Nobel Peace Prize laureates Linus Pauling and Joseph Rotblat which explore the problem of nuclear weapons.

Vital to the effort for nuclear abolition, in Ikeda's view, is stimulating the will and sense of possibility for this task among ordinary citizens. "Peace is a competition between despair and hope," he writes. "It was human beings that gave birth to these instruments of hellish destruction. It cannot be beyond the power of human wisdom to eliminate them." 3 [Read full text]