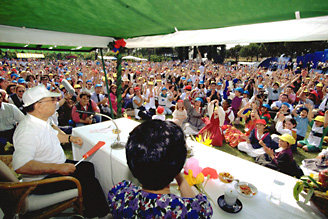 Ikeda with members of SGI-Italy in Florence, Italy, 1994­

The Role of Religion

"The welfare of people must always be the starting point and final goal of every human endeavor. As such, it is unacceptable for religion, government or any ideological system to treat people as a means to an end." 1--Daisaku Ikeda 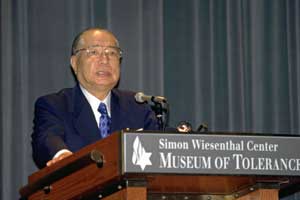 While Ikeda obviously sees a very important role for religious faith in human society, he is also keenly aware of its potential--manifested repeatedly throughout history--to act as an instrument of oppression. The purpose of religion in Ikeda's view is to liberate people from within, to enable people to establish peace and happiness in their lives. He warns against the risk that a religion, reduced to a mere formalism, can start to restrain people from without and exploit them.

Speaking at the Simon Wiesenthal Center in Los Angeles in 1996, Ikeda gave succinct expression to his views: "Religion exists to serve people, people do not exist to serve religion."

Ikeda has also described the primary mission of religion as to forge individuals who are capable of creative responses to life's challenges while leading contributive lives. These are the basic terms, from his perspective, which define the value of any religious teaching or pursuit. "There is no greater good than empowering humanity and revitalizing society," he states, but "like politics, economics and education, religion is devoid of meaning unless it contributes to this process."2

While such assertions may seem obvious, all too often the historical experience has been for religion to exploit the human capacity and need for faith--the urge to experience individual life as meaningful within a larger order of being--and to exert a restrictive, unchallenged control over people.

As Ikeda notes: "When religion dominates and oppresses people, it becomes an instrument of authority. History is filled with examples of people, who wanted only to be happy, being deceived by clergy or other religious leaders. This is an undeniable reality. Life is equally precious and sacrosanct for all people. It is a mistake to think that priests stand above lay believers, or that the president of the Soka Gakkai is more important than the organization's membership. That would be betraying the true purpose of religion." 3

Here also, dialogue can serve to help bring out the most positive potentials of each faith tradition, keeping them vital and preventing a lapse into empty formalism or dogmatism. And like any dialogue, interfaith conversations are meaningful only when they are based on a frank recognition and acceptance of difference; they can otherwise fall into a trivializing search for superficial commonalities. Ikeda has engaged in dialogue with the members and representatives of a wide range of faith traditions--from the monotheistic faiths of Judaism, Christianity and Islam, to the Eastern traditions of Hinduism, Buddhism and Confucianism, as well as secular rationalist humanism. These dialogues are part of Ikeda's efforts to bring together the rich sources of human wisdom and to help bring this to bear on the critical issues facing humankind today.