Developing a Culture of Peace 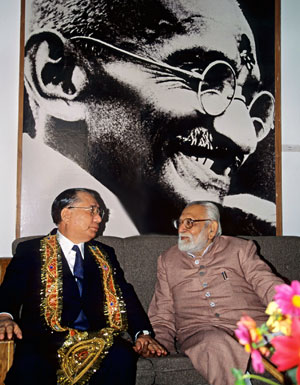 Peace, Ikeda emphasizes, is not just the absence of war. He defines a truly peaceful society as one in which everyone can maximize their potential to lead fulfilling lives free from threats to their dignity. Genuine peace can only be established on the basis of respect for the dignity of human life, on a recognition of our shared humanity.

Ikeda firmly rejects the idea that the different cultural and religious traditions that underlie the great civilizations of our planet are in intrinsic conflict. He writes, "Since 9/11, much has been made of the role religious belief plays as a factor in terrorism. But the real issue is that of exclusionary ideology and fanatic actions cloaking themselves in the language and symbols of religion. If we fail to appreciate this, and start looking askance at the practitioners of a particular faith, we will only deepen mistrust and aggravate tensions."2 [Read full text] In Ikeda's view, all cultural and spiritual traditions are expressions of human creativity responding to the challenges of life. He has described culture as growing from people in different historical and geographic circumstances attuning their ears and hearts to the wisdom and compassion inherent in the cosmos itself. Strengthening the bonds of connection and mutual respect among different peoples is the first essential step to building a robust and inclusive culture of peace on a global scale. Ultimately, such a culture of peace represents the only fundamental solution to the challenges of war and terror.

A Clash of Civilizations? 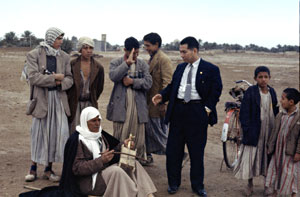 Ikeda during a trip to Baghdad, Iraq, in 1962. Exchange between people of different cultures is central to Ikeda's peace philosophy.

The September 11, 2001, terror attacks on the USA and the subsequent launching of the "war on terror" made the issue of terrorism an overwhelming focus of concern around the world. Many of Ikeda's peace proposals and other writings have examined this issue, questioning the appropriate response and looking at related issues around the questionable idea of a "clash of civilizations."

About terrorism itself, Ikeda is unequivocal: "Terrorism, which so cruelly robs people of life, can never be excused or justified by any reason or cause. It is an absolute evil. And when such acts are committed in the name of religion, it demonstrates the utter spiritual bankruptcy of the perpetrators."3 [Read full text]

The question of how to prevent and eliminate terrorism is, however, more complex. At the core of Ikeda's thinking has been a challenge to the concept that the problems of violence can be solved by violence. What are the long-term effects of a response predicated on the use of force? Even if force can appear to produce short-term results, does it not end up deepening and perpetuating the cycles of hatred and violence? And if violence ultimately does not offer a viable solution, what should form the basis of realistic response to organized terror? 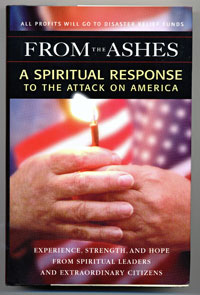 In an essay contributed to the book From the Ashes: A Spiritual Response to the Attack on America, Ikeda condemns terrorism but believes military reprisals do not constitute a solution.

Ikeda stresses that any approach that will constitute a "fundamental cure"--rather than simply a symptomatic treatment--needs to be based on the exercise of "soft power" embodied in values and culture. Such an approach takes as its point of departure, in his words, "an acute awareness of the humanity of others." This awareness is, he says, "the very essence of civilization." A response in these terms might focus on tackling the underlying conditions of poverty and injustice that are enabling factors in terrorism, and would thus express "genuine proof of civilization."4

Ikeda gives lengthy consideration to political and institutional responses to terrorism, advocating, for example, the important role of the International Criminal Court to strengthen respect for the rule of law. He sees, however, a deeper issue in need of address. He characterizes this as a "kind of progressive 'root rot' eating away at the depths of people's understanding of what it means to be human--how we define ourselves and how we relate to those different from us." Thus, "In a world trapped in cycles of terrorism and military reprisal, I feel it is vital to put the scalpel to the corrupt roots from which the spiritual malaise of our era stems. Only by mustering the courage to do this will we be able to breathe again the liberating winds of hope."5