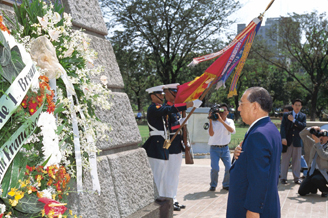 Laying a wreath at the memorial statue of José Rizal, father of Philippine independence (Manila, February 1998) 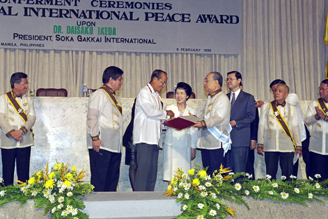 Philippine president Fidel Ramos presents Ikeda with the Rizal International Peace Award from the Order of the Knights of Rizal on the centennial of Philippine independence.

Facing Up to Asia

"Though the Japanese may have forgotten the past, the people of the Philippines have not. It is widely felt there that the Japanese were the most brutal of their homeland's conquerors . . . But the majority of Japanese are unaware of this. The actions of the Japanese military are glossed over. No apology has ever been made." 1--Daisaku Ikeda 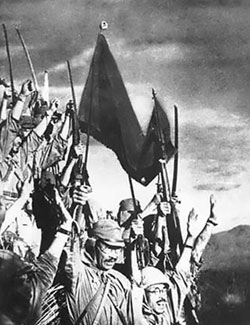 Japanese troops in Bataan, April 1942. The atrocities committed by Japanese troops on Filipino civilians during Japan's occupation of the Philippines have never been properly acknowledged by the Japanese government.

Ikeda's writings constitute a further dimension to his efforts to promote peace and mutual understanding through culture. These writings are perhaps his most far-reaching medium for promoting mutual respect between opposed cultures or nations. Because of these writings, for example, the name of José Martí, the Cuban writer and national hero who helped free the country from Spanish rule, is familiar to members of the SGI around the world. Youth members of the SGI in the USA who draw inspiration from Ikeda's descriptions of Martí's great courage and humanity will have a powerful, positive association of Cuba, her people, and her cultural and spiritual heritage, regardless of the political stance of their government.

Similarly, thanks to Ikeda's frequent references, members of the SGI in Japan know José Rizal, the hero of Philippine independence, as the heroic, virtuous figure that he was: a medical doctor, literary genius and humanitarian who inspired the Philippine independence movement and died in his early 30s. The incongruity of young Japanese people upholding this historical Filipino figure as a role model could perhaps only really be appreciated by Filipinos and Japanese, who understand the cultural contempt that Filipinos have suffered historically from the Japanese.

This contempt found its most flagrant expression in the atrocities committed by the Japanese military against Filipinos and other Asians during World War II. This history is largely ignored by Japanese officials and not well understood by Japanese people, in a country in which there is still a very strong ethos of cultural superiority over people from other--especially economically poorer--Asian countries.

Ikeda's efforts, undertaken consistently since the 1960s, to confront and address these problems have made him a trusted and respected figure throughout Asia. Ikeda has long promoted a broad range of cultural and educational exchange between Japan and her Asian neighbors--showcasing the top cultural and artistic fruits of Asian countries to Japanese audiences. Such actions have helped shift negative perceptions among Japanese. But again it is Ikeda's writings that have carried perhaps the most poignant message of conciliation. These writings have also helped facilitate his meetings and dialogues with cultural and political figures in Asia, just as these encounters have, in turn, provided the inspiration for further writing.

One example is an essay written about Maria Roxas, former President of the Cultural Center of the Philippines and daughter of the activist Josefa Llanes Escoda who was arrested and murdered by the Japanese military police during Japan's wartime occupation of the Philippines. Ikeda's essay poignantly describes Escoda's profound sense of concern for others' well-being, the humanity and sense of human dignity that she displayed even at the risk of her life. He describes also Escoda's efforts to instill in her daughter the same respect for her fellow human beings, even encouraging her not to hate Japanese people because of the actions of Japanese soldiers.

Her attitude is contrasted with that of the Japanese militarists. "Mrs. Escoda did not care about a person's nationality. She judged people solely on their worth as human beings. The Japanese militarists were exactly the opposite. The most important thing was whether a person was Japanese or not; that they were human beings came a distant second. This is how they were able to justify the unspeakably cruel acts they perpetrated on the Filipinos--acts they would not dare commit against other Japanese."2

More than bringing historical injustices to light, such essays by Ikeda illustrate the contesting tendencies of good and evil within each human being and each society and show the ultimate effects of each. "Oppressors who live by lies, discrimination and raging ego; people's movements driven by truth and humanity--the struggle between these two forces continues today."3 It is Ikeda's appeal to a sense of universal humanity that has made these essays such effective bridges between people.