"Unlike Mr. Makiguchi and Mr. Toda, who were both teachers, I never studied as a teacher nor taught in the classroom. Nevertheless, I have been able to establish the Soka educational system and gain recognition for the ideals and principles of value-creating education throughout the world. That has been my mission as their disciple."1--Daisaku Ikeda

Two key influences have shaped Ikeda's educational approach. The first is his own experience of education under Japan's militarist regime. The second is the influence of his mentor, the educator Josei Toda.

"When I was in my second year at Haneda Higher Elementary School, its name was changed to Haginaka National People's School," writes Ikeda in an essay describing how the influences of militarism were felt in his school in the late 1930s, as Japan prepared its young for its wars of expansion in Asia. "This change was mandated by the National People's School Order, a law filled with militaristic overtones that sought to turn children into soldiers. Terms such as 'loyal subjects of the Emperor,' 'drilling,' and 'group training' became staples of school life, and the gymnasiums of many schools were converted into martial arts training halls."2 [Read full text]

The Power of Human Interaction 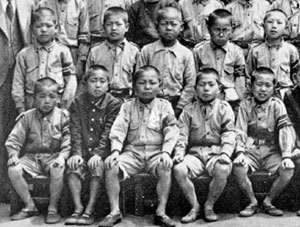 Ikeda, front row, 2nd from right, in the fifth year of elementary school

Born in 1928, Ikeda's experience of the power of education to mold children into the pliant tools of a militarized state has had a profound effect on his outlook and concerns. As the state imposed its oppressive, depersonalizing system on the lives of children, the humane character and example of certain teachers became a beacon to Ikeda, showing what the real role of educators should be: "In those dark days, when the power of ultranationalist authorities pressed down so heavily on Japanese society, my teachers held up for their students the great light of humanity . . . they firmly embraced their students and shared their lives with them, while struggling against the intrusion of political power into the realm of education."3 [Read full text]

Addressing an educators' conference, Ikeda describes the simple power of the interpersonal interactions through which the ideals of humanistic education are given form: "It is vital for teachers to speak sincerely with students. Even a few simple words are enough . . . 'What a good job!' 'Don't give up!' 'I have high expectations for you,' and words of appreciation such as 'Thanks' and 'I'll never forget this'--simple phrases of this sort can make a young person very happy. I still cherish memories of words like these from my own teachers." 4

An emphasis on the quality of the interactions between teacher and learner is perhaps the key, defining characteristic of Soka education in practice. 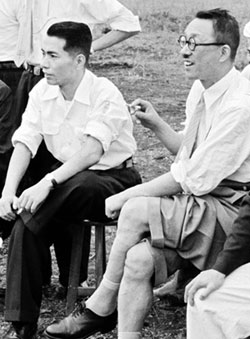 Ikeda (seated, left) and his mentor Josei Toda in 1955

In the postwar years, Ikeda enrolled in nighttime studies at what is today Tokyo Fuji University. He was at the same time at the beginning of his early twenties and in the employment of Josei Toda, who was both a skilled entrepreneur and accomplished educator. Toda was a direct disciple of Tsunesaburo Makiguchi and, with him, had cofounded the Soka Gakkai.

When Toda's businesses ran into serious financial trouble amid the postwar hyperinflation, Ikeda decided to dedicate himself full-time to assisting him. To do so he had to abandon his formal schooling. He has described how, subsequently, over the course of nearly a decade, Toda gave him painstaking private tutoring in a broad range of subjects during daily morning sessions before work and on weekends. Toda assured him that the education he would receive would be at least as good as that which he could gain at a top university.

This instruction at what he has called "Toda University" was Ikeda's firsthand experience of value-creating pedagogy.

Ikeda's experience of Toda's training had a profound influence on the model of individual development and empowerment that Ikeda has effected through the Soka Buddhist movement. It is evident in the energy which Ikeda devotes to youth: his encouragement to them to develop broad perspectives on life through reading and active engagement, and the frequent and detailed references in his speeches to the lives of historical figures and the lessons of the literature of a wide range of cultures. Also notable are the efforts that Ikeda continually makes to personally interact with and encourage individuals, particularly youth.

1 Ikeda, Daisaku. 2006. "The Tradition of Soka University." In To the Youthful Pioneers of Soka: Lectures, Essays and Poems on Value-Creating Education, 87. Japan: Soka University Student Union.