"Culture is the polar opposite of the violence of war; I see culture and the arts as the expressions of the joy of life."1--Daisaku Ikeda 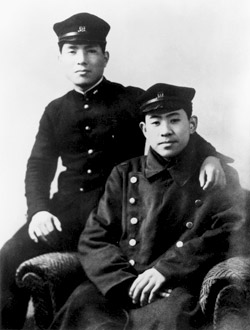 Daisaku Ikeda grew up in Japan during World War II. He was in his late teens when the war ended. It was a time that saw the nation slip from the stoic misery of the war years into the confusion and poverty of defeat and an uncertain future.

"In that period of darkness and despair," Ikeda writes, "music, along with literature, was a precious source of hope and inspiration for me." He recalls the effect on the Japanese people of the music of the great violin virtuoso Yehudi Menuhin when he visited Japan in 1951. Menuhin's music brought "a powerful surge of hope and courage," to people still recovering from the desolation of the war. Art critic Hideo Kobayashi wrote of it, "I trembled and wept . . . What heavenly sound! I realized how I had been thirsting for such beauty."2

Ikeda's sense of the great power of culture and the arts to uplift and assuage people would later become an underlying current in his philosophy of and activism for peace. It was during the turbulent period of his youth that this sensibility was forged.

Ikeda suffered throughout his youth from tuberculosis, a deadly disease at the time. He writes fondly of his memories of listening, exhausted from work and illness, to Beethoven's Fifth Symphony, known as the "Destiny" or "Fate" symphony. "As I sat in the middle of my tiny apartment, with the stirring resonance of that great work filling the room, I felt my blood race and dance with joy . . . a powerful courage resurged in my heart."3

He listened to these recordings so often, he says, that the disks eventually wore out. "I had only an old hand-cranked phonograph that I had managed to buy with what little money I could scrape together. The quality of the sound was terrible compared to today's technology, but the music communicated from heart to heart. The rhythms of that musical genius's life stirred my spirit with overpowering immediacy. My humble one-room apartment became at that moment a palace of the most glorious art."4

Ikeda, then a young leader within the Soka Gakkai, would also invite other members in the organization to his apartment to share in the revitalizing effects of this music.

The power of art to revive our humanity is what has inspired Ikeda to seek ways to bring great art into the lives of people through initiatives such as the Min-On Concert Association and the Tokyo Fuji Art Museum.

"The institutions of society tend to treat us as parts in a machine," he writes. "They assign us ranks and place considerable pressure upon us to fulfill our defined roles. We need something to help us restore our lost and distorted humanity . . . We have a voiceless cry resting in the depths of our souls, waiting for expression. Art gives those feelings voice and form."5 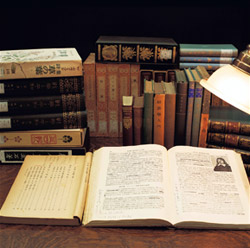 Literary works that Ikeda studied during his youth under his mentor, Josei Toda

Literature was another great source of refuge and inspiration for Ikeda. He read widely and avidly, saving up his money to buy translations of the great literary masters and philosophers. His earliest aspirations were to be a writer, and one of his first jobs after leaving home was as a magazine editor in the company of his mentor Josei Toda.

In this excerpt from one of Ikeda's essays one has a sense of how, amidst the arduous life of wartime Tokyo, his budding poetic and literary sensibilities brought him relief and a sense of connection: "In those days, even cherry trees were made into symbols of death. The Japanese people were told to be like cherry blossoms, to scatter courageously in the wind without a whisper of regret. But the cherry trees before me clearly rejected such perversion and spoke to me--powerfully, sublimely--of life. They were overflowing with hope. 'Live! Live fully and deeply! Never cease living! Outlive the winter and let your own unique nature bloom,' they said to me. Powerful emotions welled up and filled my heart. On the wall of a burnt-out factory building I used a piece of chalk to write a passage from a poem that I composed . . . I didn't bother signing my poem, but later I saw that others who shared my feelings had written their thoughts below mine on the wall."6

Ikeda describes the writers that he read in his youth as close friends with whom he would engage in lengthy conversations. One sees in his approach to literature--his writings about it and his strong advocacy among youth of the SGI and students of the Soka school system of reading classic works--a cherished sense of the value made possible by communion through literature, of great minds speaking through time, illuminating the intricacies of life and the human spirit and inspiring and guiding successive generations.