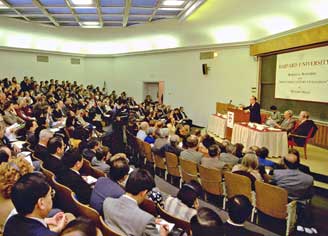 In 1974 Ikeda accepted an invitation to deliver a lecture at the University of California, Los Angeles. The following year he delivered a lecture at Moscow State University entitled "A New Road to East-West Cultural Exchange." On the same occasion he accepted an honorary doctorate from the university. These events signal the beginning of a growing international recognition for his contributions to cultural exchange and the promotion of education and peace. During the 1980s and 1990s Ikeda accepted invitations to speak at some 30 universities throughout Asia, America and Europe. His talks explore the themes of education, cultural exchange and peace, grounded in his Buddhist perspective and considered within the particular cultural, intellectual and historical context of the place. As such they display, collectively, an extraordinary breadth and depth of knowledge and insight. In the preface to the published selection of his lectures he writes, "There is nothing extraordinary about my knowledge or ability, but my Buddhist faith and my enduring wish for peace and a better world prevailed as I accepted each invitation to speak . . . I always prepared several months in advance, searching carefully for arguments, scrutinizing the validity of my conclusions, and so on, until I had revised the draft many times over."1 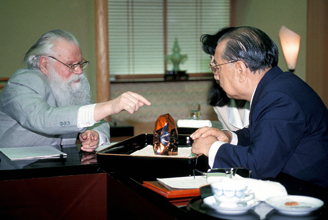 To date, Ikeda has been awarded with over 350 honorary doctorates and professorships from universities around the world. His writings are currently used in university-level course materials in countries as diverse as Argentina and the United States. Over 20 research institutes internationally have been dedicated to the study of his philosophy.

In his exchanges with educational institutions, which include numerous dialogues with educators around the world, one of Ikeda's primary concerns has been to develop a network of educational exchange and collaboration. Ikeda has called education the culminating endeavor of his life, seeing humanistic modes of education as the basis of the development of humane and flourishing societies.

The development of Soka University offers an image of the focus of this endeavor. To quote the citation of the University of Hong Kong on the occasion of its conferral of an honorary doctorate on Ikeda: "The spirit of internationalism as well as the pursuit of excellence is very much in evidence in the evolution of Soka University. In only a quarter of a century--no more than an instant in the timescale of a university's history--Soka has developed into one of the most competitive and educationally progressive institutions in Japan . . . Importantly, Soka has become one of the most outward-looking of Japanese universities . . . Exchange agreements have been established with some forty [currently over 100] overseas universities."2 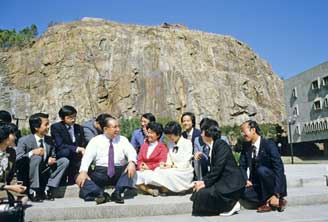 The Boston Research Center for the 21st Century, founded in 1993 in Cambridge, Massachusetts, USA (renamed Ikeda Center for Peace, Learning, and Dialogue in 2009), brings together scholars and activists in dialogue on common values across cultures and religions, seeking to support the development of a global ethic for a peaceful twenty-first century. Focal points of the center's work are human rights, nonviolence, environmental ethics, women's leadership and education for global citizenship.

The Toda Institute for Global Peace and Policy Research (renamed Toda Peace Institute in 2017) carries out independent peace research and cooperates on joint projects with other research centers. It seeks to create a global network linking scholars, activists, research organizations and NGOs. Established by Ikeda in 1996, it is based in Tokyo with an office in Honolulu.

The Tokyo-based Institute of Oriental Philosophy, established in 1962, fosters exchange between Eastern and Western scholars of religion through seminars, symposiums and public lectures and interfaith dialogues. It conducts independent research on the history, literature and philosophy of Buddhism; on comparative religion; and on the interrelations between religion and science and religion and society.

The latest development in the foundation that Ikeda has been constructing is the establishment in May 2001 of Soka University of America, a liberal arts college in Orange County, California, USA, dedicated to the vision of contributing to the development of Pan-Pacific culture and the fostering of global-minded individuals dedicated to peace.