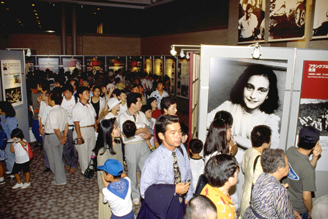 More than two million Japanese have viewed "The Courage to Remember: Anne Frank and the Holocaust" exhibition since it first opened in May 1994.

"Peace is not some abstract concept far removed from our everyday lives. It is a question of how each one of us plants and cultivates the seeds of peace in the reality of daily living, in the depths of our being, throughout our lives. I am certain that herein lies the most reliable path to lasting peace." 1--Daisaku Ikeda 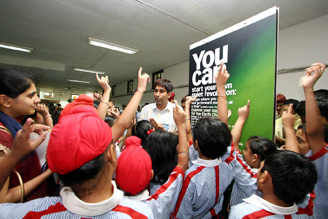 SGI exhibitions such as "Seeds of Change: The Earth Charter and Human Potential" seek to foster an ethos of responsibility for global and social issues. (India, September 2007)

In 1975, Ikeda became president of the Soka Gakkai International (SGI), the international organization of a Buddhist movement that had until then centered on Japan. Under Ikeda's leadership the organization has developed as a broad-based grassroots peace movement of some 12 million people around the world.

As an NGO in consultative status with the United Nations, the SGI is active in awareness-raising and public education focusing on peace, disarmament, human rights and sustainable development. Humanitarian relief has also been an important field of activity for the SGI.

Ikeda has fostered among SGI members a strong ethos of responsibility for global and social issues. This same spirit of global citizenship is a key characteristic of the various educational institutions he has founded. More than simply carrying out a particular religious practice, members see the mission of the SGI as one of bringing Buddhist wisdom to bear on the task of resolving the problems confronting the world, and of building solidarity for social justice and peace. Such activism may be at odds with a popular image of Buddhism as a practice of placid withdrawal from the complexities of society.

The thrust of the organization's social engagement philosophy is distilled in the reply given by Ikeda, during a trip to the Soviet Union in 1974, when he was challenged by Soviet Premier Kosygin to define the ideology of his Buddhist movement. Ikeda's answer was "Peace, culture and education, the underlying basis of which is humanism." 2

Peace, culture and education have become the standard of the SGI organization and this formulation continues to guide the broad range of activities that SGI organizations and individual members carry out in their respective societies.

As president of the SGI, Ikeda has issued annual peace proposals since 1983--the year the SGI was accredited as a nongovernmental organization with ties to the UN--containing ideas grounded in Buddhist humanism for viable responses to global issues. These are shared with heads of governments, other NGOs, academic institutions and UN officials. A central and consistent focus of these proposals has been on ways of revitalizing and strengthening the role of the UN. 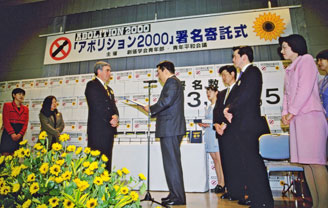 "The United Nations must serve as the key venue and focus for our efforts," Ikeda asserts. "Humanity faces a range of complex issues that show no regard for national borders--threats such as terrorism, armed conflict, poverty, environmental degradation, hunger and disease. A reformed and strengthened UN is essential to mustering effective responses to the global challenges of the new era." 3

The proposals further help define and provide a focus for the peace activities undertaken by SGI organizations around the world. Examples of these activities include initiatives such as the youth-driven Victory Over Violence nonviolence peer education program carried out in schools across the USA; a nuclear abolition campaign that gathered and presented 13 million signatures to the UN in 1997; and the collection and publication of individuals' wartime experiences. Large-scale international exhibitions on themes such as nuclear disarmament, building a culture of peace, sustainable development and human rights have been an important focus of the SGI's activities for many years.

Ikeda himself has held dialogues with Secretary Generals Kurt Waldheim, Javier Peréz de Cuellar and Boutros Boutros-Ghali, and is recipient of the United Nations Peace Medal and the UNHCR Humanitarian Award.

In August 2006, the SGI President met with UN Under-Secretary-General Anwarul K. Chowdhury and presented a proposal entitled "Fulfilling the Mission: Empowering the UN to live up to the world's expectations." [Read 2006 UN proposal]

Ikeda has also founded peace, cultural and educational institutions to promote global collaboration and cooperation on those themes.