Amid the postwar chaos and confusion Ikeda read voraciously, searching for answers in whatever scarce books on literature and philosophy he could get his hands on. It was at this juncture that he encountered Josei Toda (1900-58), the person who would come to have the most formative influence on his life. Toda, an educator and the cofounder of the Soka Gakkai lay Buddhist association, had opposed the policies of the wartime government and had suffered persecutions and a two-year imprisonment as a result. 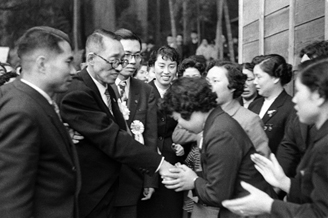 In 1947, Ikeda attended a small gathering of Soka Gakkai members where he heard Toda speak. Although Ikeda was generally suspicious of religious ideology, he writes, "The words of a person who had suffered imprisonment for his convictions carried a special weight. I felt intuitively that I could trust him." [Read Full text.]

Toda's willingness to stand up to the militarist state particularly impressed Ikeda. Having endured the abuse of the authorities and suffered the death of his own mentor, Toda was deeply passionate about the need to effect a transformation within Japanese society. "I decided," Ikeda recalls, "to follow him and to learn from him."2

Toda was, at this time, in the process of rebuilding the Soka Gakkai lay Buddhist association, which he had founded together with his mentor and fellow educator Tsunesaburo Makiguchi (1871-1944) in 1930 and which had been all but destroyed by the militarist government during World War II. [Brief history on the Soka Gakkai]. Toda was deeply convinced that the philosophy of Nichiren Buddhism, with its focus on the profound potential of the individual human being, would be the key to bringing about a social transformation within Japan.

The years following his release from prison in 1945 until his death in 1958 were spent in a monumental effort to develop a movement of individuals empowered by this philosophy. Ikeda, who had devoted himself to supporting Toda and his vision, naturally came to play a central part in the development of the Soka Gakkai.

Ikeda's association with Toda lasted only ten years. His mentorship by Toda, however, has become the defining experience of his life and, as he describes it, the source of everything he has done and become. Ikeda speaks and writes about his mentor continually. Almost all of his speeches and writings reference Toda's ideas and influence. The theme of mentorship is one that Ikeda continues to explore and discuss. In his exchanges with notable individuals, he inevitably questions them about their mentors, and his writings and speeches about historical figures frequently examine this same theme.