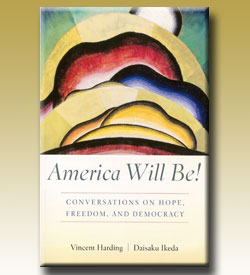 CAMBRIDGE, USA: Dialogue Path Press, the publishing arm of the Ikeda Center for Peace, Learning, and Dialogue, released America Will Be! Conversations on Hope, Freedom, and Democracy in August 2013, coinciding with the 50th anniversary of the historic March on Washington where Dr. Martin Luther King Jr. gave his celebrated "I Have a Dream" speech.

America Will Be! is a dialogue between Daisaku Ikeda and Vincent Harding, a friend and adviser to Dr. Martin Luther King Jr. and professor emeritus of religion and social transformation at the Iliff School of Theology in Denver, Colorado. The two authors engage in a cross-cultural dialogue illuminating the historic events of the American civil rights movement and the vital role of civil society, especially the youth, in opening a new path forward for peace and justice in the twenty-first century. Prof. Harding and Mr. Ikeda both agree that the movement's victories expressed a profound vision of freedom, equality and nonviolent social change that can and should guide our modern experiments in democracy. Above all, the message of America Will Be! is one of hope and human possibility.

Prof. Harding and Mr. Ikeda first met in Tokyo, Japan, on January 17, 1994. The idea of collaborating on a dialogue grew out of discussions they held at that time and was continued through written correspondence. Their ongoing dialogue was initially serialized in Daisanbunmei, a monthly commentary magazine in Japan, from February 2010 to May 2011. A Japanese edition of their discussions was compiled and published as a book and released in December 2012.

[Adapted from an article in the August 28, 2013, issue of the Seikyo Shimbun, Soka Gakkai, Japan]