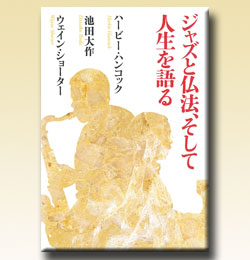 TOKYO, Japan: The Mainichi Newspapers Co., Ltd. has published in book form a serialized conversation between jazz musicians Herbie Hancock and Wayne Shorter, both of whom were part of jazz giant Miles Davis's "second great quintet" in the early-1960s, and Soka Gakkai International President Daisaku Ikeda. Their discourse, Jazu to buppo, soshite jinsei o kataru (tentative translation: Discussions on Jazz, Buddhism and Life), explores the roots of jazz, its role in the advancement of culture, and its resonance with Buddhist principles.

In the course of their conversation, Mr. Shorter, a nine-time Grammy-winning tenor saxophonist and composer, observes that jazz has the capacity to break through the superficial constraints imposed by dogma or decree and equates it with dialogue and the creative process. Meanwhile, Mr. Hancock, a 14-time Grammy winner, acknowledges jazz's African-American roots and says it has since evolved into a global art form. He adds that jazz is such a powerful medium of expression that no political authority, no matter how oppressive, could hope to suppress it.

A devotee of classical music, Mr. Ikeda attributes his rekindled interest in jazz to the former president of the John Dewey Society Dr. Jim Garrison's depiction of the musical genre as one of the greatest spiritual contributions the United States has made to the world. One of jazz's principal appeals, according to Mr. Ikeda, is that it took root and flowered "from the great earth of ordinary people " and, as a dynamic cultural force, is part of the "struggle for limitless betterment and the creation of value."

The conversation between the two jazz musicians and Mr. Ikeda was originally serialized in the Seikyo Shimbun, the Soka Gakkai's organ newspaper, from September 2010 to December 2011. The three first met in the 1970s and their conversation on jazz has continued over many years both in person and through correspondence.

Messrs. Hancock and Shorter are members of SGI-USA and serve as co-presidents of the International Committee of Artists for Peace based in Los Angeles, USA.

[Adapted from an article in the January 30, 2013, issue of the Seikyo Shimbun, Soka Gakkai, Japan]