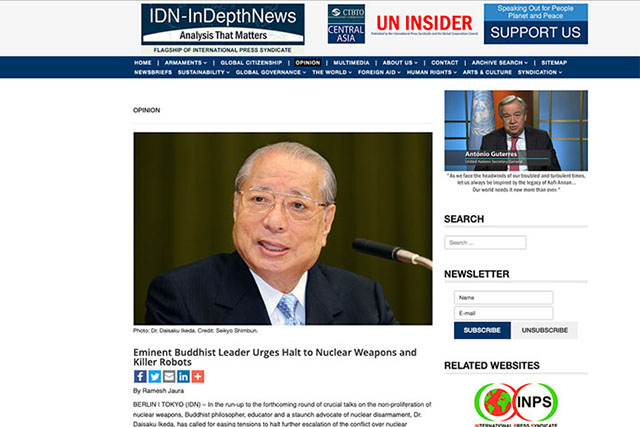 In an online interview with the news agency IDN, SGI President Ikeda shared his perspectives on the current state of nuclear disarmament and the development of lethal autonomous weapons systems (LAWS).

The interview was conducted in the days leading up to the third session of the Preparatory Committee for the 2020 Review Conference of the Parties to the Treaty on the Non-Proliferation of Nuclear Weapons (NPT) held from April 29 to May 10, 2019, at the UN headquarters in New York.

As the SGI president notes, global society is currently “at a crucial crossroads between returning to an intense nuclear arms race and reducing tensions in order to realize nuclear disarmament.” In this context, he responds to questions about the suggested focus of the upcoming nuclear non-proliferation talks and how to help the Treaty on the Prohibition of Nuclear Weapons (TPNW) come into force.

“How nuclear-dependent states act will be key to whether the TPNW can enter into force at an early date,” he says, calling on such states to “demonstrate a solid will in calling for a world without nuclear weapons” and to work together to overcome obstacles preventing them from joining the treaty. To that end, he draws attention to a recommendation from his 2019 Peace Proposal, “Toward a New Era of Peace and Disarmament: A People-Centered Approach,” for the creation of a group of like-minded states, Friends of the TPNW, in which Japan should participate.

The Buddhist leader also describes his grave concerns about the development of lethal autonomous weapons systems (LAWS), incorporating artificial intelligence. The deployment of these would, he says, “be equivalent to that of the advent of nuclear weapons.”

IDN is the flagship agency of the International Press Syndicate.

[Adapted from articles in the April 30, 2019, issue of the Seikyo Shimbun, Soka Gakkai, Japan]