The Federal University of Sergipe in Brazil Confers Honorary Doctorate 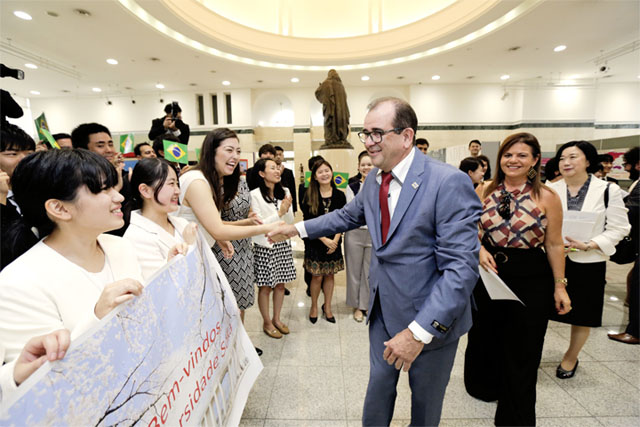 The Federal University of Sergipe, founded in 1968, is spread over six campuses and is made up of 73 departments. Approximately 26,000 students study there.

In his speech, Dr. Antoniolli commended Mr. Ikeda for his contributions to peace based on solid humanistic principles, as well as praised the Soka Gakkai’s grassroots activities that have advanced peace, culture and education based on the Buddhist philosophy of respect for the dignity of all life. He concluded by expressing his gratification at being able to welcome Mr. Ikeda into the community of Federal University of Sergipe.

In his acceptance speech, Mr. Ikeda conveyed his heartfelt gratitude for the honor. Referring to Dr. Antoniolli’s background in pharmacology, he spoke about the power of equality and dignity in education, referencing the “Parable of the Medicinal Herbs” in the Lotus Sutra. The message of this parable is that people, in all their diversity and regardless of their differences, all have the ability to make happiness, wisdom and humanity blossom within their lives. By approaching learning with humility, he said, youth are able to “blossom” in their own unique ways, collectively creating a diverse garden of “good herbs,” bringing benefit to people and society. He talked about the importance of having an indomitable spirit and achieving a victory in life.

Stressing the importance of youth around the world building solidarity in support of the Sustainable Development Goals, Mr. Ikeda praised the Federal University of Sergipe for its efforts to develop capable leaders committed to protecting the global environment.

In conclusion, he acknowledged the many international students from Brazil in attendance at the conferral ceremony, describing them as a vital part of the solidarity of global citizens at Soka University.

[Adapted from articles in the August 3, 2019, issue of the Seikyo Shimbun, Soka Gakkai, Japan]