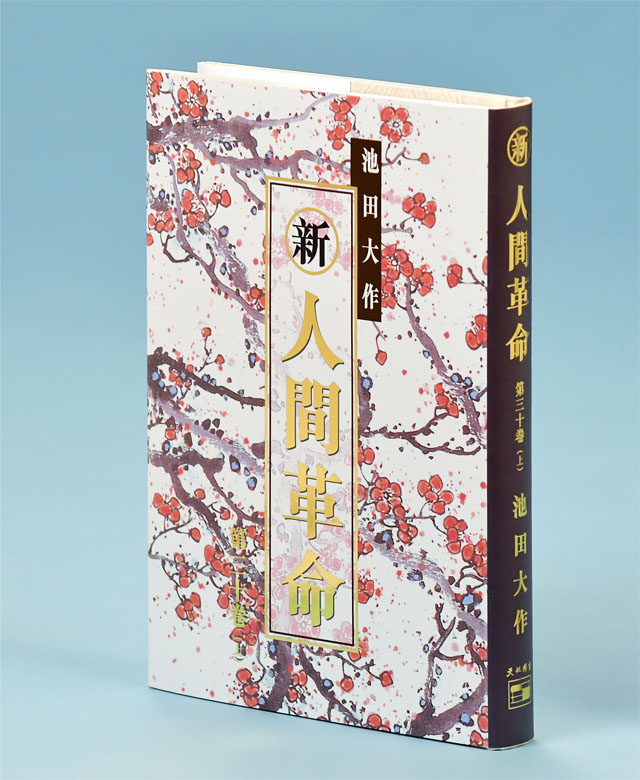 HONG KONG, China: A traditional Chinese edition of the 30th and final volume of Daisaku Ikeda’s serialized novel, The New Human Revolution, was recently published by Cosmos Books. The series chronicles the development of the Soka Gakkai Buddhist movement from the perspective of Shinichi Yamamoto, Mr. Ikeda’s pseudonym, who is at the time third president of the Soka Gakkai. Volume 30 opens with his travels in Asia beginning with his journey from India to Hong Kong in February 1979.

A book launch for the newly translated volume was held at Cosmos Books in Hong Kong on May 3, 2019. At the event, SGI-Hong Kong General Director Ng Chor Yuk conveyed his heartfelt appreciation for those involved in the book’s publication. Cosmos Books President Tsang Hip Tai shared his appreciation for Mr. Ikeda’s steadfast efforts for peace and promotion of Sino-Japanese friendship and his lifelong commitment to completing his novel.

Dr. Sun (2nd from right) speaking at the book launch for the traditional Chinese edition of The New Human Revolution, Vol. 30, at Cosmos Books

Chinese author and translator Dr. Sun Lichuan, who was instrumental in the editing and publication of the newly-translated volume, spoke about Mr. Ikeda’s motivation for writing The New Human Revolution. As a protégé of second Soka Gakkai president Josei Toda, Mr. Ikeda believed that spreading his mentor’s vision for world peace after his death would be a testament to Mr. Toda’s greatness, and he desired to chronicle his mentor’s legacy as well as recounting his own path as a disciple for future generations. In this context, Mr. Ikeda has also written that the purpose of writing the novel is to record for posterity the dedicated commitment of the pioneer members who “braved opposition and persecution in their efforts to introduce others to the Daishonin’s teachings."

Dr. Sun concluded his talk by sharing the first line of the series, which, he said, particularly moved him: “Nothing is more precious than peace. Nothing brings more happiness.”

[Adapted from an article in the May 17, 2019, issue of the Seikyo Shimbun, Soka Gakkai, Japan]