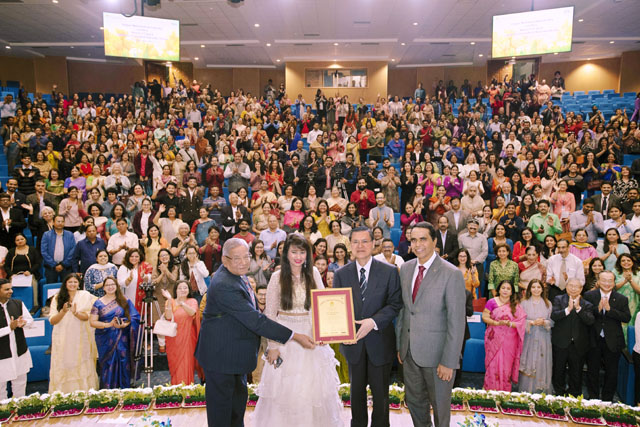 JNU is a private university in Jaipur, the capital city of the northern state of Rajasthan. It was founded in 2007, growing out of two previously established institutes owned by Chancellor Bakshi. The university, which includes the JNU Hospital and Medical College, prides itself on its student-centered learning. It has over 7,000 students and has been ranked among the top 25 best private universities in India.

In his message, Chancellor Bakshi described Mr. Ikeda as a genuine leader who offers students of JNU a reminder of their potential to make extraordinary contributions. This, he said, was the vision of JNU—to unlock students’ “capacity to create a legacy and lead lives with honor, nobility, audacity and integrity.” Leadership, he said, “is about making a difference right where you are,” remarking that the world needed more leaders like Mr. Ikeda.

In his acceptance speech, Mr. Ikeda expressed his deep appreciation for the honor, lauding JNU as an esteemed institution “that brilliantly illuminates our world and its future with the light of wisdom and hope that issues from eternal India.” Citing a Buddhist scripture that “the name will invariably invoke all the blessings of the thing itself,” he noted that the name “Jaipur” conveys the meaning of “victory.” In this regard, he shared three points he believes are important to a vision of victory. First, the power of victory arises from vigorous efforts to learn. Second, the light of victory is spread through our contributions to society. And third, victory arises from a fierce determination never to give up. He stated, “Where there is compassion, wisdom wells forth inexhaustibly. Where there is perseverance, the path to victory will invariably open. . . . It is my prayer and confident conviction that young people will go forth from the gates of JNU and from the land of India to bring the brilliant light of victory to humankind.”

[Adapted from articles in November 23, 2019, issue of the Seikyo Shimbun, Soka Gakkai, Japan]