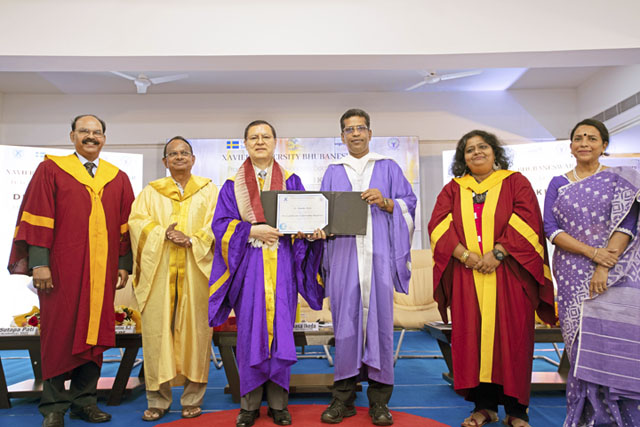 Xavier University has its origins in the Xavier Institute of Management, which was founded in 1987 and earned a reputation as one of India’s top business schools. The university itself was established in June 2013 and is the first Jesuit University in India. In his welcoming remarks, Vice Chancellor Antony R. Uvari described Mr. Ikeda as a “herald of global peace” and expressed the significance of the conferral taking place in the area in which the historic Kalinga War was fought. This was the savage conflict after which the Indian warrior king Ashoka (circa 3rd century BCE) famously renounced war, converted to Buddhism and established a pacifistic reign.

Dr. Uvari remarked that XUB, as part of the global Jesuit community, strongly advocates the mission of peace and reconciliation and that it is now mainstreaming sustainability in business and social development spheres through the university’s Xavier School of Sustainability, fulfilling the social and environmental mission of the Jesuits. He described the conferral upon Mr. Ikeda as an important milestone for the university and expressed his hope that the relationship between XUB and SGI would contribute to “nurturing the seeds of peace” in the world.

Opening the Xavier School of Sustainability’s Fifth Annual Sustainability Summit, of which the award ceremony was a part, Professor Sutapa Pati said that Mr. Ikeda’s dialogues and openness to the exchange of ideas have set an example of how sustainability can be achieved, by linking peace, human rights, disarmament and education for sustainability.

In his acceptance message, Mr. Ikeda expressed his heartfelt appreciation for the honor, saying that he was moved by the strong resonance between the spirit of magis—the continual aspiration toward greater good—upheld by XUB and the value-creating (Soka) philosophy of Tsunesaburo Makiguchi, the founder of the Soka Gakkai and Soka Education. Both, he said, embrace trust in the unlimited potential of life and encompass a sense of pride in our humanity and, as such, are relevant to the theme of sustainability, offering a source of hope in our pursuit of a sustainable world.

It is through an inner transformation—a “human revolution”—he said, that we are able to manifest the inherent potential of life and bring about a necessary transformation in society. It was King Ashoka’s experience of just such a revolution that inspired his legacy of promoting social welfare, environmental protection, women’s rights, religious tolerance, economic equity and cultural exchange—all of which reflect the present day notion of sustainable development. In conclusion, he urged the audience to heed the call in Ashoka’s edicts to work with “great effort” for the welfare of the world and, in the spirit of magis to strive toward a sustainable global society.

[Adapted from articles in the November 25, 2019, issue of the Seikyo Shimbun, Soka Gakkai, Japan]